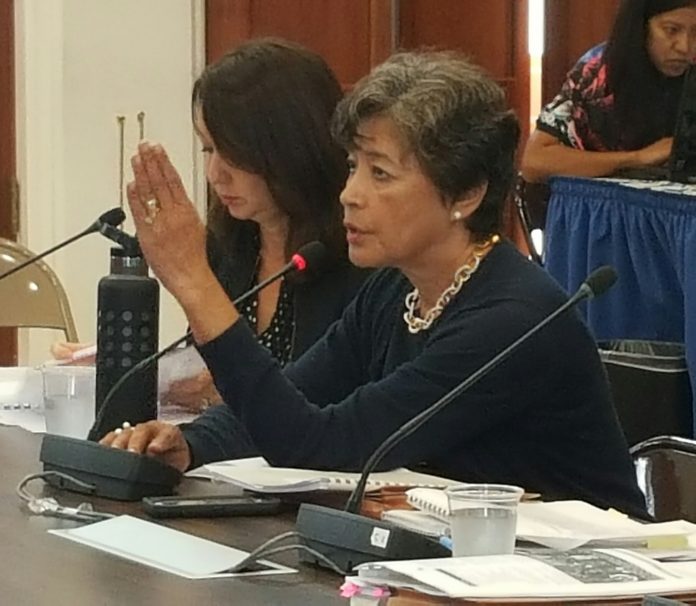 Guam—A budget hearing for the Office of Public Accountability at the legislature on Friday filled in a few blanks for lawmakers eager to track down why special funds are being transferred from government agencies and not replenished.

During the OPA hearing, Public Auditor Doris Brooks confirmed for lawmakers that the budget surplus she reported for FY17 was due, in part, to the controversial transfer of specially designated public funds. This announcement comes on the heals of revelations during a recent public hearing that $641,000 had been transferred out of the Chamorro Land Trust for other government purposes, leaving the trust bereft of the money it needed to conduct land surveys for infrastructure to clear the way for decades-overdue lease awards.

According to Chamorro Land Trust Administrative Director Michael Borja, that money was written off and never paid back. Such shuffling is looking more and more indicative of an illegal trend in the administration of the local government’s public finances, a trend that may have spread virally over a period of years.

Brooks drew into focus a picture lawmakers have been piecing together over the course of recent hearings, most notably the budget hearing for the Dept. of Administration on Thursday.

“The concern we also have, to address the concern with the legislature, [is] ‘how much money has been transferred out from these special revenue funds into the general fund?,’” Brooks said, speaking on behalf of OPA. “Because right now they’re listed as due funds, most of them don’t have cash.”

Showing signs of helplessness and distress on Thursday over questions about the day-to-day management of GovGuam’s threadbare cash flow, DOA Finanace Manager Kathy Kakigi blurted out what seemed the naked truth. “Think about it, I mean, the bottom line is ‘which law do you wanna break? Do you  want to break federal law with payroll, or do you wanna break these special [funds]?’

“And that’s where part of the surplus is coming from today, for 2017, is the transfer,” Brooks said Friday.

“Because they were able to use special funds?” Sen. Therese Terlaje asked.

Today was Brooks’ final work day as elected public auditor after 18 years in the position. In an interview with Pacific News Center immediately following her last public hearing as auditor, she offered a tearful thank you for the public’s support and asked for its reinforcement in her next endeavor.

Brooks is vying for the Republican nomination in the race for Guam’s only delegate’s seat to the lower house of Congress. Deputy Public Auditor Yuka Hechanova, pictured to the right of Brooks in the feature photo to this article, will assume many of the daily functions of the public auditor’s position until a special election is held to replace Brooks. The outgoing auditor told PNC the special election will coincide with fall elections.