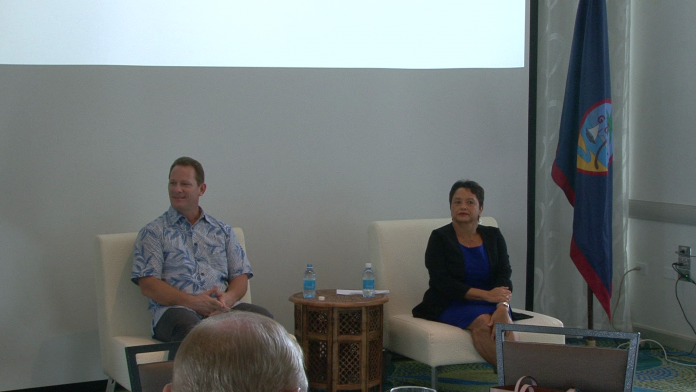 Guam – Another gubernatorial forum is now in the books. Today, rotarians with the Rotary Club of Guam had the chance to hear from GOP nominee Ray Tenorio and Democrat nominee Lou Leon Guerrero on several issues.

The two candidates, who are just five days away from winning or losing an election, answered questions about their first 100 days in office, tax breaks through qualifying certificates and education.

Another topic the two candidates discussed was their stance on the issue of deporting criminals back to their country of citizenship. Both Tenorio and Leon Guerrero said they supported criminal deportation but disagreed on the government’s authority to do so.

“If these people that come to our islands become violent criminals, I am not against deporting them. What I would do is–but we cannot, as a government, we do not have that authority. What I will do is work very closely with the federal government in immigration services because they have the authority by mandate to take those criminals and put them back in their places. We–and the government of Guam do not have that authority,” Leon Guerrero said. “I will also work very closely with the leaders of those island nations because the leaders of those island nations are very close to me. I know them well.”

“The authority does exist under the Organic Act of Guam. We have used that authority. Governor Calvo has to remove individuals on conditions that they agree to depart the island through commutations of the sentences,” noted Lt. Governor Ray Tenorio. “The problem is the federal government doesn’t see it as a high priority to remove individuals who have violated.”

He added: “So it’s important that we look at how do we help with the education process, the orientation, understanding the laws, working with these foreign leaders to ensure that they understand the expectations when they come to Guam.”

According to the governor’s office, the victims of the three men were notified and have agreed to the commutations and deportations.