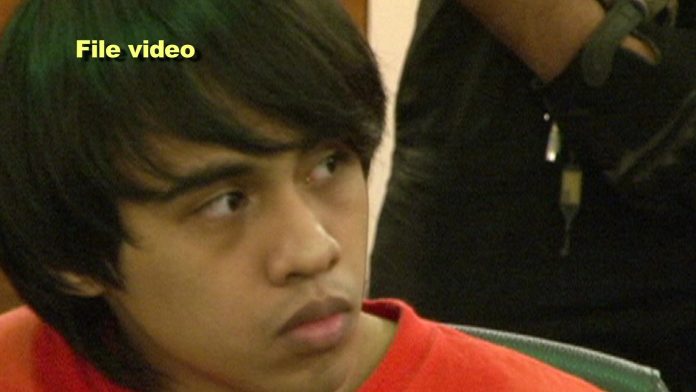 Defense Attorney Stephen Hattori argues that the jury should have been instructed that they had an option to convict Chad DeSoto of a lesser offense.

Guam – Chad DeSoto is making a final attempt at overturning his conviction. His case was up for appeal in the Supreme Court today where attorneys argued over what’s called burden shifting and the high emotions that went into the high profile trial.

Defense attorney Stephen Hattori says there’s no disputing that Chad DeSoto was indeed the man who drove his car through a crowded Tumon sidewalk killing one then jumping out of his car and stabbing two others to death and in the process injuring 11 others in February of 2013.

The case was solely about whether or not DeSoto knew what he was doing at the time. Now in his appeal, Attorney Hattori says that apparently during DeSoto’s trial last year, the trial court did not properly instruct the jury on “diminished capacity,” which differs from the defense of “not guilty by reason of insanity.”

Furthermore, Hattori believes that certain comments made by Lead Prosecutor Phil Tydingco during trial last year negatively influenced the outcome of the trial.

“When the prosecutor was warning the jurors not to–‘don’t let him walk out of here on insanity defense,’ that ‘he doesn’t have responsibility when the evidence shows he does because he hasn’t proven it,’ so that’s also inflammatory because it warns jurors that if you return a verdict of not guilty, he’s gonna go free, which is not the case with an NGI (not guilty by reason of insanity) verdict,” explains Hattori.

“This is one of the most powerful prosecutors on the island, actually the most powerful prosecutor on the island standing in front of 12 jurors basically telling them if you say not guilty this guy’s gonna walk. He’s gonna be out there at Kmart, at the mall. He’ll be out there. But it also concerns me because he also shifts the burden of proof,” explains Hattori. “If the government bears the burden of proving mental state, governs that in particular is burden shifting. That is not permitted.”

“To say that the prosecution was out of bounds by focusing on the burden, as far as the affirmative defense insanity, is just to ignore that that’s the crucial issue in the case. And you can say that it’s burden shifting, but when the defense has the burden, it’s not buden shifting. It’s commentary on the defense’s failure to carry that burden,” says Assistant Attorney General James Collins.