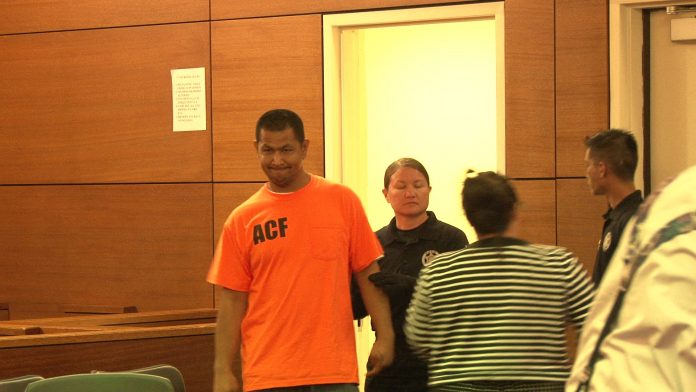 The Bank of Guam robbery suspects all plead not guilty despite 2 police confessions.

Guam – Although two out of the three suspects in the 2014 Yigo Bank of Guam robbery supposedly confessed to the crime, all three defendant’s entered pleas of not guilty.

Irvin White, his father Jackery White and Edward Baza were arrested after police say Irvin, already in custody for the Days Inn Robbery, confessed to the notorious bank heist. In the process Irvin implicated his father, Jackery and Baza.

Police say Jackery also confessed, but Baza denied any involvement. Irvin White also told police that Jathan Tedtaotao, now serving time for the bank robbery and the three other defendants who were acquitted of the crime last year, had nothing to do with it.

It may come as a surprise that the Whites pleaded not guilty, considering the fact that police say they already confessed.

The three also asserted their rights to a speedy trial which means the Superior Court now has 45 days to take the three defendants to trial.

Meanwhile, Irvin and Jackery White also pleaded not guilty to the October 2014 burglary of the San Ramon building in Hagatna, however the two waived their rights to speedy trials in that case.

Jackery White also pleaded not guilty and waived his right to a speedy trial in the burglary of Attorney Gary Gumataotao’s home.

The three are due back in court for the bank robbery on February 3rd at 9 am.