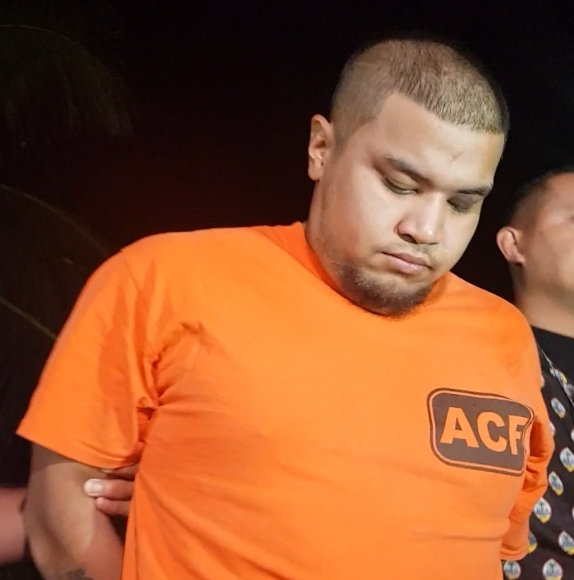 Guam – It was a gruesome crime scene the morning 15-year old Timica Nauta was discovered murdered in her Dededo home on June 16, 2018.
Acosta appeared in court today to be formally charged for his involvement in the teanager’s murder. He was arrested on charges related to murder and home invasion.
But an unexpected twist occurred in court, a typographical error on the Magistrate complaint on charge 1 related to murder, the Attorney General Office mistakenly used the words “wrecklessly caused” instead of “intentionally and pre-meditatively caused” the death of Nauta. This resulted in that charge being dismissed at this time.
Formally charged only for home invasion the attorney general’s request to hold Acosta on $1,000,000.00 dollars was denied instead he has been held on a $300,000.00 cash bail. Should he be able to come up with the money he will once again be released on conditions that he stay away from Nauta’s family.
Now that Acosta has been charged details of the murder have been released and according to Acosta’s attorney there is a possibility that Nauta had invited Acosta into her home. Although that assertion remains to be seen at this time.
Court documents describe a bloodied scene indicating that there were blood trails left on the bedroom walls leading to where the teenage girl laid slain.
“Nauta was discovered in a kneeling position leaning forward on the right side of the bed, with the right side of her face down, and turned toward the foot of the bed.” said police.
Blood was found near Nauta’s face and a pool of blood surrounded her body, but no murder weapon, or witnesses.
Following the gruesome discovery authorities had very little to go on until nearly four months later when police say two individuals provided information that Acosta had confided in them that he killed the teenage girl. Indicating that Acosta had described the murder scene in a way that only the person who committed the crime could.
Court documents state, that on June 18, 2018 an autopsy was performed on Nauta’s body and there were five lacerations discovered that were suspected to be caused by a sharp blade.
The lacerations were on the left side of her face, behind her left ear, on her left index finger, on the left side of her neck, and on her right shoulder blade.
Samples collected from the crime scene were sent to the FBI for testing, results from those tests are still pending.
But during the investigation police say they learned that multiple burglaries were committed in the Dededo area, crimes Acosta had been tied to as police discovered items from the burglaries in Acosta’s possession.
The complaint states that Acosta was questioned and allegedly admitted to being involved in the burglaries and was subsequently charged in CF0383-18 and held in custody.
The complaint points out that, one of the burglaries which occurred the night of June l5 to June 16 was directly across from Nauta’s residence.
Police say while Acosta was in custody for CF0383-18 he allegedly confided in at least one other inmate that he was the person who killed Nauta.
When police interviewed Acosta they say he explained his addiction to methamphetamine and stated that “he usually wouldn’t commit burglaries, but when he uses methamphetamine he does things he wouldn’t otherwise do.”
The complaint states that Acosta told police “he went into Nauta’s room which was dark and that Nauta was startled arid that he made a mistake. He further stated that killing Nauta was not his intention, that he merely made a mistake.”
The complaint also stated that after praying Acosta believes his spirit has been set free since he has confessed his sins.
Records of the Office of the Attorney General indicate that the Defendant was on felony pretrial release for Family Violence in CF0015-18 when he committed the burglaries and the murder.
His next hearing is on October 30, 2018