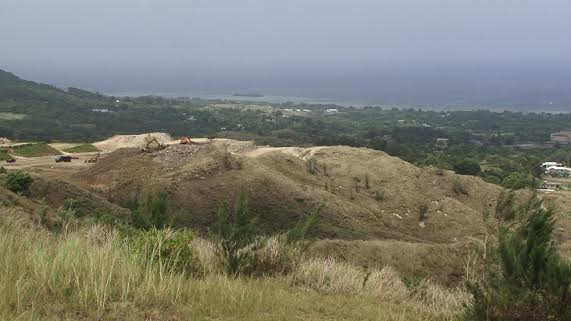 The developer believes that a major culprit of erosion problems in Santa Rita is fire.

Guam – Buena Vista estates developer Henry Simpson says that his development is not the cause of increased water runoff into the Namo river or increased erosion that Santa Rita residents have been complaining about. Today (Fri.) Simpson gave PNC a tour of the Buena Vista estates to explain.

Residents of Santa Rita are concerned about increased water flow and increased erosion of the banks of the Namo river. Santa Rita Mayor Dale Alvarez says that he’s already lost one house in his village due to river erosion and he’s afraid he may soon lose a few more. Some residents believe the Buena Vista development has added to increased water flow in the river.

However developer Henry Simpson says Buena Vista is not to blame.“I can understand how they might think that because they look up the hill and they can see us but if you look on the maps and we’ve been really careful with our drainage plans and things and so if you look up you can see that what we are doing affects the area of concern right now,” said Simpson.

Simpson showed us a topographical map that shows where his development is and where the erosion problems are occurring He believes that most of the water running into the river that affects the residents in the lower parts of Santa Rita is not coming from his property but from other properties adjacent to his. “We’re constantly working on trying to do the best management practices for drainage for silt control for erosion control,” said Simpson.

“One of the ideas we put forward is if maybe we could somehow convince the Navy to stop these fires before they start you know when as soon as we have a fire spotter and somebody calls in hey there’s a fire out in Babulao and they could send out a helicopter and stop it before it takes out a hundred acres or so of grassland,” said Simpson.

Simpson has planted thousands of trees on his property and is still planting other types of ground cover to mitigate erosion. He also believes the government should give incentives to property owners to plant trees on their property to prevent erosion.

Simpson says his drainage master plans for phases one through three of his development have been carefully thought out and approved by GovGuam. He is currently working on finalizing the approval for phase four.