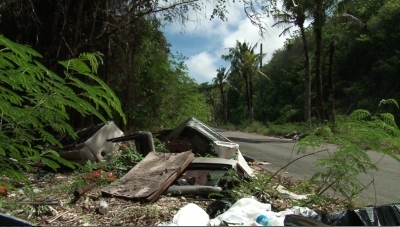 Additionally, last week, the Guam EPA in collaboration with the Navy cleaned up the Marbo cave dumpsite.

“The complaints have been pretty consistent. I believe it increased after the closure of the Dededo transfer station. There is a lot more household waste. A lot of the investigations that I have gone on, it’s household waste and construction demolition debris,” said San Nicolas.

In it’s quarterly status report, GBB compared the combined tonnage brought into the Harmon Transfer station from July 2015 to march 2016 to the combined tonnage brought into the now closed Dededo Transfer station from July 2014 through march 2015. GBB states that the drop in total tonnage is about 19 percent while the drop in customer usage during the same time was 21 percent.

GBB Associate Principle David Manning tells PNC although he cannot tell with certainty where the drop in tonnage went; he says it’s likely it was illegally dumped.

Additionally, Yigo mayor Rudy Matanane told PNC in a previous interview that he has seen a rise in illegal dumping in Yigo and he blames the closure of the Dededo transfer station. Matanane says although he voted to close the station at the time, he can see the effects today.

“A lot of these isolated areas that we go and we enjoy over the weekend, we hike down to Marbo cave, the Pagat area is another example, they are all private property owners and at any time if they feel that illegal dumping is an issue, they can close down the gate and just not let people go through their property,” said San Nicolas.

In terms of proactive measures, San Nicolas says he has outreach programs to help educate residents on how to properly dispose of trash. Additionally,Guam EPA participates in cleanups. Last week, the Guam EPA in collaboration with the Navy cleaned up the Marbo cave dumpsite.