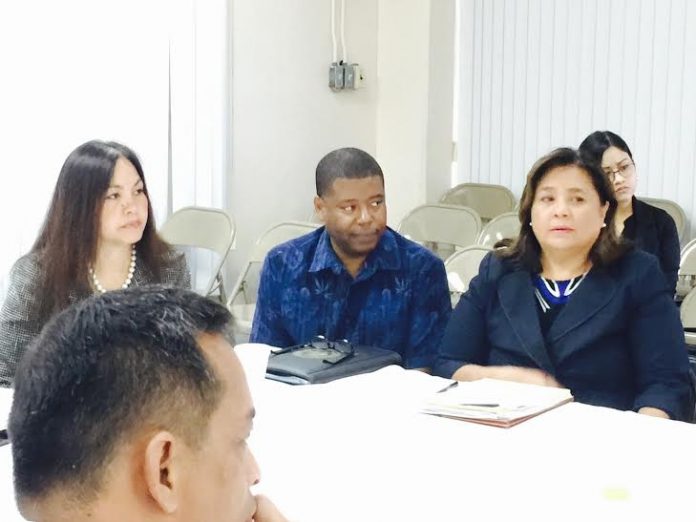 Guam – The U.S. Bureau of Prisons Director Charles Samuels Jr. is on Guam with a delegation of prison and U.S. Marshall Service officials. The delegation came at the request of Chief Judge Ramona Manglona of the district court of the Northern Mariana islands and Chief Judge Frances Tydingco-Gatewood of the U.S. District Court of Guam. Yesterday (Mon.) the federal officials toured Guam’s prison facilities.

“The purpose for their visit here is to tour our facilities and take a look at that as well as addressing some of the issues that we have regarding those who are detained on Guam and in the Northern Mariana islands as well as some of the services that are provided when they are sentenced to a term of imprisonment,” said Guam and CNMI Chief Probation Officer Rosanna Villagomez Aguon.

Chief Judge Tydingco-Gatewood said, “We wanted to actually have them visit the places where our federal detainees are housed both at the Hagatna detention center and the Mangilao facility. And we also wanted them to answer a lot of questions that we have regarding crediting. How are defendants, federal prisoners, once they are designated, how are they designated to prison facilities in the mainland?” The Chief Judge says they want to see if they can have a re-entry center or halfway house for federal prisoners. A re-entry center would help them transition out into the community. “They have resources that they’ve offered to the local government in terms of sharing them and hopefully the local government will utilize that,” said Chief Judge Tydingco-Gatewood.

The federal delegation is not only here to tour the prison facilities and learn about Guam’s challenges but also to answer questions and give Guam leaders some guidance. For example Speaker Judi Won Pat says she and other law makers learned a lot from the federal officials during their meeting with them. “They went through a description of a lot of re-entry programs that I know sparked a lot of interest among my colleagues and wanting to look now at what are some of the things they’ve done there that we actually could translate and use with our own local inmates,” said Won Pat. The Speaker says the Vice-Speaker also asked them if they could send out a team to help Guam tackle the issues the island has with our overcrowded prison.