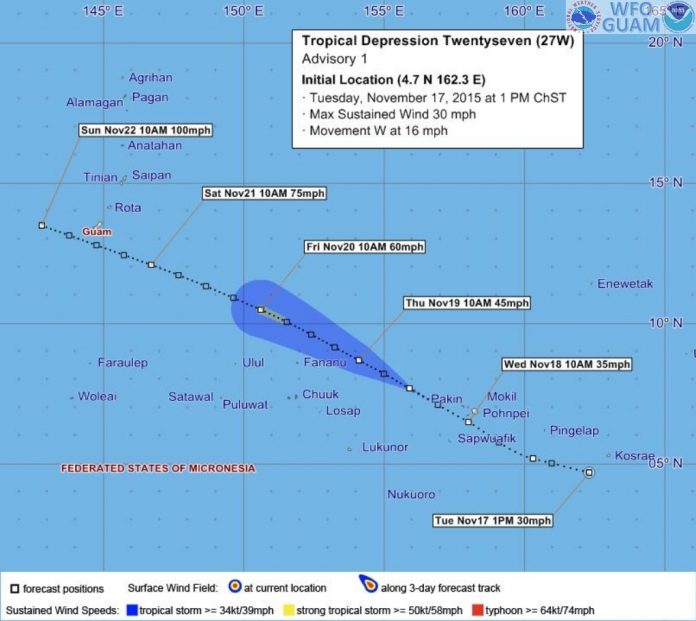 Guam – A circulation that was near Kosrae since earlier this morning became a Tropical Depression 27W, according to the National Weather Service’s first update on 2 PM (CHST).

Currently 27W is moving towards west at 16 miles per hour, and is expected to turn towards west-northwest while gradually increasing its current Maximum Sustained Winds of 30 miles per hour. “This track could bring the storm toward the Mariana Islands. Scattered showers and isolated thunderstorms along with gusty winds of 15 to 25 MPH with gusts to 35 MPH are expected in the southern Mariana Islands starting Thursday and persisting through at least Saturday. Rainfall could be heavy at times…especially Thursday night through Friday night. Stronger winds are possible by the weekend,” NWS adds. The Weather Service also hints the possibility of the depression becoming a storm by tomorrow (Wednesday) night, as this circulation is expected to intensify further in upcoming days.

As of 1 PM, Tropical Depression 27W was located at about 4.7N 162.3E, or about 65 miles southwest of Kosrae, and about 1,340 miles east-southeast of Saipan and Guam. A Tropical Storm Watch has been issued for Pohnpei, Sapwuafik and Pakin in Pohnpei state, as a tropical storm force winds of 39 to 73 mph are possible within 48 hours.

Currently, there are no watches or warnings issued for the Marianas, but the National Weather Service advises residents to not only be informed about this circulation, but also to “be ready to prepare for tropical storm conditions if a watch or warning is issued.”

YOU CAN READ MORE ABOUT TROPICAL DEPRESSION 27W FROM NWS

According to an NWS Special Weather Statement, at 1 p.m., Tropical Depression 27W is 65 miles southwest of Kosrae and centered about 1340 miles east-southeast of Guam and 1335 miles east-southeast of Saipan, moving west with maximum sustained winds of 30 mph. This tropical depression is expected to turn toward the west-northwest and gradually intensify over the next few days, possibly bringing it to the Mariana Islands by Saturday evening.

Tropical Depression 27W will bring scattered showers and isolated thunderstorms along with gusty winds of 15 to 35 mph with gusts to 35 mph to the southern Mariana Islands as early as Thursday.

A small craft advisory is in effect until 6 a.m. (ChST), Thursday for Guam, Rota, Tinian, and Saipan coastal waters. Combined seas building 8 to 10 feet will produce hazardous conditions for operators of small craft. Inexperienced mariners, especially those operating smaller vessels, should avoid boating in these conditions, especially near reef lines and when entering or leaving harbors and inlets. The Offices of Guam Homeland Security and Civil Defense (OHS/OCD) remind that all care and caution must be exercised by anyone who will be near the ocean.

Although there are no watches or warnings in effect for Guam at this time, residents should monitor this tropical depression closely as it makes its way toward the Marianas. OHS/OCD, in coordination with the NWS, will continue to monitor all systems in our area closely and provide updates. Attached is the latest NWS forecast track and wind distribution graphic.

For more information, contact Public Affairs Officer, Jenna Gaminde at (671) 478-0208 or via email at jenna.gaminde@ghs.guam.gov.