Guam – When the school children at Merizo Martyrs Memorial School begin their school year this morning, they will start of with raising the flag, something that hasn’t been done for several years.

Last week, close to 100 Department of Military Affairs employees and Guam National Guard Airmen and Soldiers descended on the school grounds Aug. 13-15 to help prepare the facility for the upcoming school season, under the Calvo administration’s Adopt-A-School initiative.

The work included fixing the flag pole, which school staff said, had not been used in over 10 years.

The civilian employees and servicemembers water blasted sidewalks, painted hallway walkways, walls and ceilings, picked up trash, and cut down excess foliage around the school grounds to beautify and prepare the school.

Sophie Lujan, MMMS administrative assistant, expressed thanks to the DMA and GUNG members for all the work that was done.

“The amount of work that you guys are doing in three days, I can’t accomplish in two to three months… We don’t have the resources, the big dump truck, the water blaster, the buffer…” she said.

There are only three other school employees, aside from herself, at the school during the summer months, according to Lujan.

“The main thing you are helping us with is the hard part with all the manpower… With the manpower you have, all the help and energy you’re providing us, it means a lot to us in the school and for the students. Thank you very much on behalf of the school here in Merizo,” Lujan added. 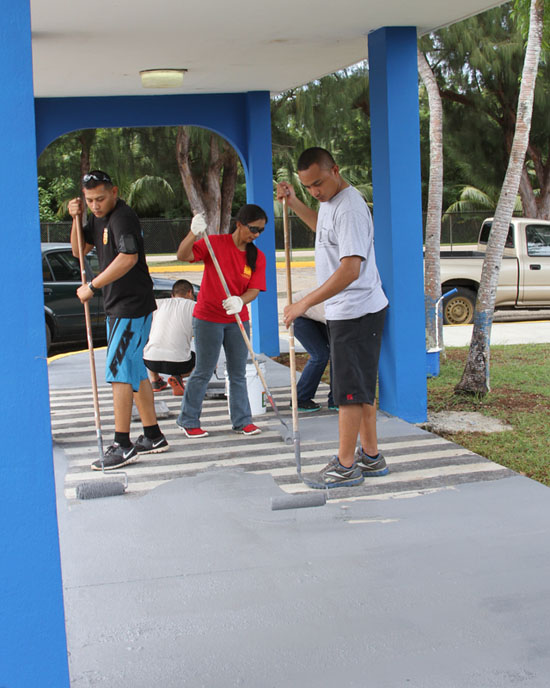 The Guam Guard Soldiers and Airmen went to work at the school for one or two days during the three-day span, according the Non-commissioned Officer in Charge SFC Jovita Unsiog, which minimized impact on operations or training.

DMA and the GUNG had adopted the school under Gov. Eddie Baza Calvo’s Adopt a School initiative.

This is the second year the DMA employees, and GUNG Soldiers and Airmen went to perform this community project at the school.