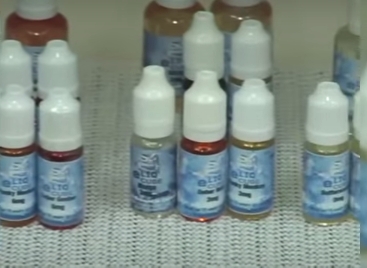 According to an FDA study cited by Dr. Annette David, out of all the e-cigarettes tested with the label “no nicotine” for the study, only one cartridge was actually nicotine free.

Guam – E-cigarettes or “vaping” as it is commonly referred to, is popular here on Guam, but how safe is vaping? Dr. Annette David gave a presentation on what she calls the dangers of e-cigarettes.

Dr. David warned about the misinformation spread about the popular alternative to regular cigarettes. She says Often times, E-cigarettes tout “zero nicotine” products, as a safe alternative to cigarettes, however Dr. David dispels this rumor. According to an FDA study cited by Dr. David, out of all the e-cigarettes tested with the label “no nicotine”for the study, only one cartridge was actually nicotine free. Dr. David also points out that e-cigarette vapor actually contains harmful gases making its secondhand smoke dangerous as well.

“The vapor, the liquid is dangerous but when you make it into a vapor and you breathe it out, that also has measurable amounts of chemicals and they’ve measures formaldehyde and acetaldehyde. These are all carcinogens, formaldehyde is embalming fluid, its used to preserve dead bodies, benzene, tobacco specific nitrosamines, so even the second hand vapor is dangerous,” said Dr. David.