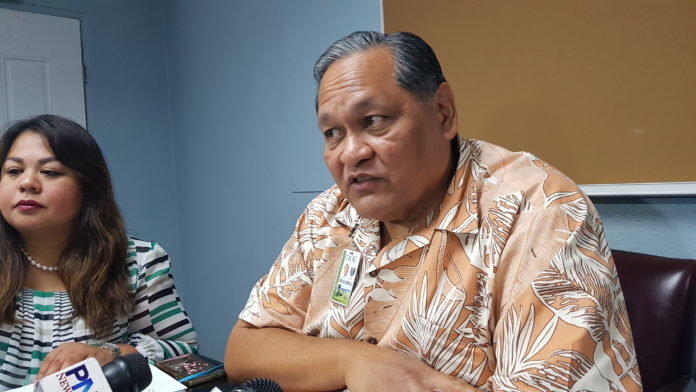 Guam – In the midst of a government financial crisis the Department of Corrections was proactive in efforts to reduce the amount of overtime accrued by their officers, but with a shortage of man power doing so would require the help of another law enforcement agency.

The Department of Corrections employs 199 Correctional officers but they need a total of 303 to properly staff the facility which as of today houses 690 prisoners.

The ideal ratio of Correctional officers on any given shift should range between 67 to 70 but that is just a dream at this point.

Instead the Department is left operating at half that with anywhere from 25 to 35 officers. This means that officers have had to work 12 hours shifts with 5 days on and 2 day off, a gruesome work schedule in a high stress job.

“We were putting our officers at risk as a result of having lost 41 officers. With GPD on board we were able to move officers in. Although GPD is not necessarily on post, they do assist with transport, with visitor’s center and the HUB and perimeter,” shared Lamorena.

Just this fiscal year alone DOC has lost 22 officers to attrition, and with a hiring freeze in effect the department not been able to fill those positions.

“They have assisted us currently, or initially we had the Hagatna Precinct officers here with 36 officers assigned here and now they have rotated out and now we have the Dededo Precinct here at DOC,” explained the Director.

Although those numbers have been reduced to half.

“In October we had our overtime averaging between 79 to 80 and at a point to 91-thousand. If we kept this track we were going to be running at over 2 million dollars in overtime,” shared Lamorena.

“If you notice in February our OT jumped up. On February 3rd we paid out $114,000.00 and February 17th we paid out $131,000. So at that time that when we went and approached the governor’s office that we needed assistance,” explained Lamorena.

While saving money on overtime is a perk the main issue Lamorena shared for seeking assistance was to maintain safety and security.

But exactly how much OT has been saved?

That is about a 50-percent decrease from March 3rd to March 31st. But according to Lamorena he anticipates OT to once again increase because of the current situation the facility faces.

“One is we have less officers now from GPD, because we have Dededo Precinct here and secondly, we have now many of our officers who are currently going on annual training 27 officers. Annual training with the reserves and Guard and so we are forced to now go on a 12-hour shift 5 and 2 now,” according to Lamorena.

According to Lamorena the GPD officers assigned to DOC are not accruing any overtime as they are working their regular 8-hour shift.

But the question now remains for GPD, regarding how much OT they are accruing as a result of supporting DOC and covering the gaps left behind in GPD.

Lamorena states that they are working on legislation to create a DOC Reserve Officer program that they can turn to in times of need such as this. He plans on submitting that to the legislature next month.