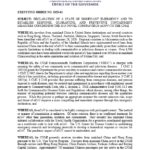 After roughly two months leading the Department of Corrections, its director, Frank Ishizaki, is stepping down by the end of the week.

Ishizaki sent an email to prison staff Wednesday advising that he would resign.

Governor Lou Leon Guerrero says she will appoint a new director for the department of corrections Friday.

In a statement the governor said she accepted Ishizaki’s resignation “with a heavy heart.”  But she is confident that Deputy Director Captain Joe Carbullido “will continue the progress Ishizaki has made.”

Ishizaki, who is in his 70s, cited age and health as his reasons for leaving the department.

Ishizaki was tapped to head the island’s prison after former director Samantha Brennan resigned last Nov. 22. This was his second run as DOC director but according to the letter received by DOC management, he says: “With regret, I will be stepping down at the end of the week. It was a very short stint but it is necessary.”

When Ishizaki took on the position, it was acknowledged that the challenges facing the prison were great and in the two months at the helm, he stated: “There is much to be done to improve DOC and thanks to all of you, we have established a plan to reduce recidivism. I will count on you to execute the needed changes and improvements.”

Ishizaki goes on to highlight the accomplishments in the short time frame, saying that 37 new Corrections officers were hired and they are waiting to hire additional parole officers, caseworkers, psych techs, and corrections officers.

In closing, Ishizaki said: “Your working conditions have been the worst I can remember but help is on the way. I will count on you to continue to carry out your duties in order to keep Guam safe. Your continued commitment will make DOC significant and appreciated. Thank you for your service and support.”

At this time, it is unknown who will be named director of DOC, or if Deputy Director Joseph Carbullido will assume the role. However, sources at DOC say they are hopeful the next to take the helm will also have experience in the Department of Corrections.

Governor’s Communications Director Janela Carrera says that a replacement for Ishizaki will be named in the coming days and that Gov. Lou Leon Guerrero has accepted his resignation with a heavy heart.

“Frank’s brief tenure at DOC brought confidence and stability to the institution. I respect that he has the courage to care for his health and wish he and his family the best in the days and years to come. Josh and I are thankful for his friendship and for his desire to serve our community,” stated the governor. “In speaking with Frank, I am confident that Deputy Director Captain Joe Carbullido will continue the progress Frank has made. I will continue to support DOC, its employees and its mission.”