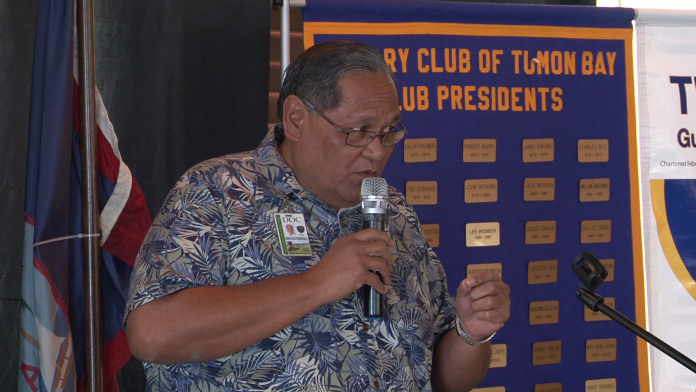 Guam – Corrections Director Lamorena put things in perspective for Rotarians on struggles faced at the prison facility and explained how his DOC team is managing security with scant resources.

When Tony Lamorena first took the helm as Director of the Department of Corrections there were 235 officers, 36 additional recruited but as of today 199 officers remain.

“Turn over rate at DOC is tremendous stress related with the job is difficult this week alone I had five officers submit their resignation,” disclosed Lamorena

He shares that the base pay for a DOC officer is about $26,000, and with overtime that officer makes close to $60,000. And while overtime pay is great, the stress of the job and being overworked takes its toll.

He says that part of the reason they are losing officers is because of under funding, pointing out that FY 2018 budget requested was $29.7 million but were only given $26.6 million to cover all expenses. This lack of funding means that the officers are overworked.

66 officers are dedicated to these areas 11 Special operations or SWAT team, 7 assigned to transport conducting 20 runs per day handling 35 inmates on a daily basis, 7 officers Visitors PC processing 30 to 50 visitors a day among other assignments.

“We run about 124 officers per day and that’s on a 24-hour shift to watch anywhere from 650-700 individuals. We have alpha bravo shifts who are currently on a 12 hour shift 5 days on 2 days off,” shared Lamorena.

These officers not only are tasked with overseeing the safety and security of the prisoners but they must also ensure that contraband does not make its way into the facility.

“There are 700 individuals, 24 hours a day, seven days a week who think about how they can get contraband into prison. They will try to beat the system as much as they can…even me, with a bad arm, I can throw contraband over the fence, that’s how close we are to the community. The back side where the domes are a 10-year-old child can throw contraband over the fence. You have to remember that we have to remember that we have a lot of drug dealers in DOC who are still conducting business in DOC,” revealed the director.

Lamorena shares that compensation for smuggling a cellphone into the prison facility is 1- thousand dollars. Further stating that there are individuals in DOC who run the operation and the black market.

“Vincent Rios who is going on trial now he was found with 1.8 million dollars in cash in his possession …its a constant daily battle,” Lamorena clarifies that the discovery was not made at DOC.

He says they are trying to get funding to better secure the perimeters and are working on installing surveillance cameras to monitor the entire perimeter by the end of the year.

Meanwhile DOC has been successful with Operation Green Vigilance which aims at interdiction, this involves unannounced shakedowns, mandatory pat downs and controlled delivery times for supplies.

“So we do daily unannounced shakedowns, I don’t even know where and when these shakedowns will be done its done by the operations commander and the platoon commanders,” explained Lamorena.

He says approximately 7-percent of shakedown result in findings, and that number has gone down as Lamorena states that sometime they go weeks without finding any contraband.

But there is still a lot of work that needs to be done and DOC needs the funding to do it.