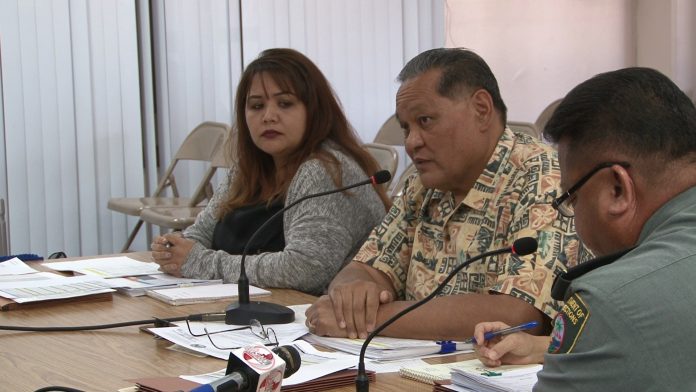 The budget hearing for the Department of Corrections was held today at the Guam Legislature.

Guam – the Department of Corrections is also facing a budget shortfall this fiscal year. During their budget hearing today, acting DOC Director Tony Lamorena disclosed that despite being allocated a million dollars to hire new corrections officers, they haven’t hired any new officers since the start of fiscal year 2016.

This revelation came as a surprise to finance chair Vice Speaker BJ Cruz, who grilled the department even further. DOC is now asking for $28.3 million for FY 17, which is a 9 percent increase in their budget from the current fiscal year.

DOC Deputy Director Carla Borja explains that they haven’t been able to hire any new COs because the processing of their GG1s have been held up at the Department of Administration. She says they are hoping to have 43 new COs within 4 months.

“We just received the listing of eligibles three, two weeks ago and we just completed the 43 interviews for the 43 openings we have for corrections officer 1,” says Borja.

“No offense, but I know that when you want to move 106 GG1s over the weekend, even if it is Christmas weekend, it happens. Why couldn’t we move these GG1s as quickly through and processs them?” questioned Vice Speaker Cruz.

“How many new officers do you need on board so that … to run the whole post?” asked Cruz, to which Warden Allan Borja answered that they would need 186 corrections officers.

Allan Borja said that at this point they have a total of 130 COs running both the Mangilao and Hagatna facilities.

Without the 43 new hires, Lamorena says COs have been working excessively and for fiscal year 2016 alone, they are tracking to accrue close to $3 million in overtime.

“Overtime, vice speaker, at this time, I think we’re tracking almost $3 million by the end of the fiscal year,” explained Lamorena, adding that they had only budgeted $940,000 in overtime for FY 16.

“Hopefully Adelup hears it. Your inability to move 40 GG1s has meant that this legislature’s allocation of $900,000 for overtime is being completely, completely ovwershadowed by currently running at $3 million,” lamented Cruz.

Lamorena says they are hoping to make up for that extra $2 million through salaries. The shortfall in salaries, Lamorena is hoping, will be covered by the DOC revolving fund.