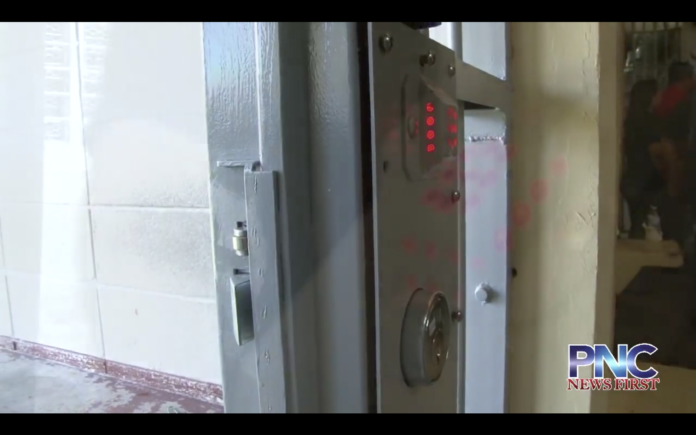 Guam – After several years of waiting and planning, the Department of Corrections unveiled their newly installed security system. However, not all housing units received the safety and security upgrades.

After 27 years, the DOC consent decree has been lifted and with that the prison compound is making strides to upgrade the facility and to show the community just how far they have progressed.

The media was taken on a tour beginning with a demonstration of the first completed locking mechanism in Post 17. Vice President of contractor Willow Security, Brian Terry described some of the security features and demonstrated how the locking mechanism works.

“We also have a tamper alarm in it so if the inmate was to tamper with the lock it has an audible sound and also a flash to alert the officers that some one is tampering it.,” said Terry. “The piano hinge here is full stainless steal with a half-inch pin and a ten-gauge leaf. [It also has] a triple bypass DPS and what that means is regular magnets can not trick it and that is what tells the doors is closed. As long as the door is secure they are not going anywhere.”

The first of three units to be completed were displayed during the tour. DOC says the remaining two units will be upgraded within the next five months. In addition to the locking devices, the facility has also added six high definition cameras to the housing unit for increased security.

“This post previously never had any surveillance in here so this should help the officers operate more efficiently and safely,” a DOC representative said.

About 20 cameras will be installed throughout the three units. But that’s not all, as you may recall DOC has also begun replacing the roof skins on the dome housing units. According to Deputy Director Kate Baltazar that project will take 15 days per dome to complete, with a final date of completion set for March.