“I’m excited that the youth league has started again – in fact, I was counting down the days,” said Usita-Lee, a goalkeeper for the Quality Distributors FC U14 team.

Usita-Lee led an impressive defensive line for Quality Distributors in the team’s opening match against the Wings FC, shutting out the defending champions for over 40 minutes. Midway through the second half, the Wings’ Ritsuki Umeda managed to finish one of his shots after taking a through pass from teammate Takumi Ito for the final 1-0 score.

[The Strykers’ Vincent Cruz sprints toward the goal for a shot against the Sidekicks in a U14 match of the Docomo Pacific Robbie Webber Youth Soccer League at the Guam Football Association National Training Center. The Sidekicks won its league opening match 2-1.]

“Seeing in the schedule that we were going to play the defending champion Wings first, we were nervous at first, but we were determined to try to score,” Usita-Lee said. “We kept them down to 1-0, and even though we lost, it’s an improvement from the last time we played against them.”

In other U14 matches, a Tomas Calvo goal and a Giancarlo Abril penalty kick were enough for the Sidekicks to edge the Strykers 2-1. Clayton Mitchell scored the Strykers’ goal. Community First Dededo Soccer Club beat the Wolverines and the ASC ISA Islanders Betde blanked the Islanders Asut.

In the U17A division, the defending champion Islanders Betde started off its fall season campaign with a 6-2 win over the Strykers. Phillip Ogo scored twice for the Islanders and teammates Austin Cardines, Jared Collado, Ryan Quitugua and Justin Johnson also scored. Leo Diaz and Philip Au scored for the Strykers. The Wings Black edged the Southern Cobras 1-0 on a goal by Toy Matsushita. In other U17A matches, the Wings Red defeated the Sidekicks via forfeit and the Southern Heat battled to a 1-1 draw with the Wolverines. In the U17B division, both Quality Red and Quality Blue picked up shutout wins over the Islanders Asut and Apaka, respectively. 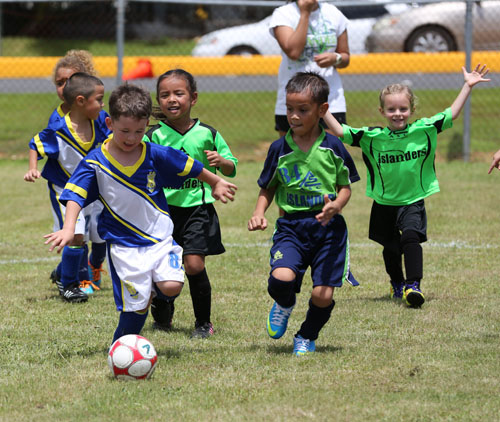 [The Lil’ Bombers Yellow and the ASC ISA Islanders Rosa play in a U6 match of the Docomo Pacific Robbie Webber Youth Soccer League at the Guam Football Association National Training Center.]

In the U12A division, the Wings slipped past Community First 4-3. Kaito Atsuta, Shion Shimizu, Mark Iseke and Bradly Lubas scored for the Wings. Richelle Ragadio, Tyler Hilliard and Diether Messner scored for Community First. In other matches, Quality picked up a win over the Sidekicks via forfeit, the Islanders Betde edged the Tigers 7-6, and the Wolverines defeated the Islanders Asut. In the U12B division, the Islanders Apaka battled to a 3-3 draw with the Cobras, the Strykers shut out Quality Distributors 4-0, and Community First blanked Tumon 3-0. The Lil’ Bombers and the Barracudas also picked up wins.

[Quality Distributors FC’s goalkeeper Tara Usita-Lee, in black, dives and cradles the ball before the Wings’ Ritsuki Umeda is able to take a shot in a U14 match of the Docomo Pacific Robbie Webber Youth Soccer League at the Guam Football Association National Training Center.The Wings edged Quality 1-0.]

In addition to matches, GFA, in partnership with Atkins Kroll Chevrolet, held the much-anticipated grand raffle prize drawing for the Supersonic Sweepstakes, a fundraiser for youth soccer clubs. Chris Surber, a coach from Lil’ Bombers, had his ticket picked as the winner of a new 2013 Chevrolet Sonic.

Youth league matches in all age divisions continue Saturday and through to Nov. 23.