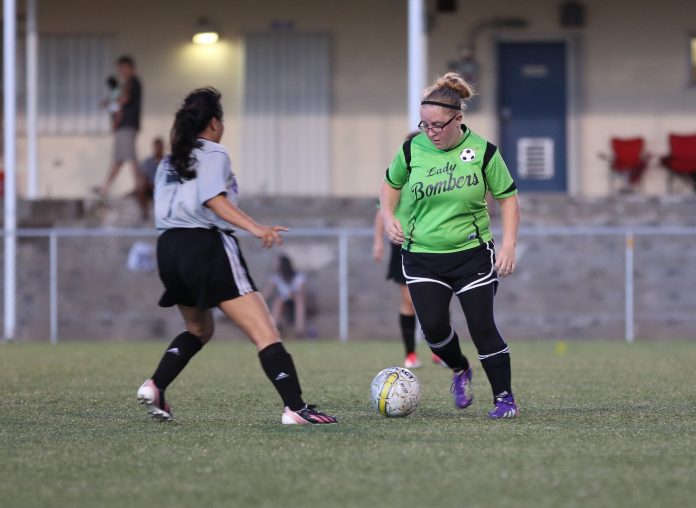 “When I first joined my team in the league, I would feel a little intimidated when some of my teammates would tell me, wow, your daughter is such a good player, maybe she got it from you and they would think I knew how to play,”

HARMON – For many mothers who play in the Docomo Pacific GFA Soccer Moms League, the recognized athletic talent of their children oftentimes precedes them, creating certain expectations from teammates and opponents alike.

“When I first joined my team in the league, I would feel a little intimidated when some of my teammates would tell me, wow, your daughter is such a good player, maybe she got it from you and they would think I knew how to play,” said the Momsters’ Dee Shippey, mother of three soccer-playing children, including Franshay Shippey, IIAAG Girls High School Soccer League championship match MVP and youth national team player. “I actually never played soccer before until I joined the Soccer Moms League. I always tell others that the passion my children have to play the sport are really from them and I just support them when they play.

“Since joining the Soccer Moms League, I’ve been learning more and more about the sport from a player’s perspective, which I think also helps me as a youth coach,” Dee Shippey added.

In addition to cheering on her children who all play for Quality Distributors FC on Saturdays during the youth league seasons over the years, Shippey also was coaching, beginning at the U6 level. Shippey now coaches at the U12 level assisting Michelle Nadler, who also is her coach in the Soccer Moms League. Shippey feels that by having the opportunity to be on the receiving end of all the coaching directives and motivational talks from Nadler as a player, she better understands her role as a coach with her club’s youth teams. Other than learning more about playing soccer and coaching youth teams, Shippey said she will continue to play in the league because it’s fun and hopes more will join, too.

The Soccer Moms League restarted Sunday at the Guam Football Association National Training Center after a two-week hiatus for the 2018 FIFA World Cup Qualifiers played at GFA. Shippey and many of her teammates on the Momsters team stayed connected to the sport through the break as volunteers for the historical events held in Guam, where the Matao first defeated Turkmenistan 1-0 and next, India 2-1, to emerge as leader of their Qualifier group, which also includes I.R. Iran, Asia’s top country, and Oman.