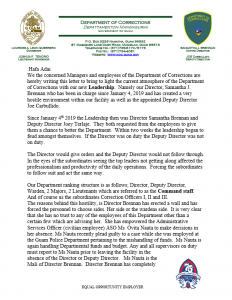 Following an anonymous grievance letter made public supposedly by Guam Visitors Bureau staffers and managers, it is now the Department of Correction’s turn.

In an open letter signed only “Core of the Department of Corrections,” supposed DOC managers and employees aired their grievances against DOC director Samantha Brennan and appointed Deputy Director Joe Carbullido who they say created a “very hostile” environment within DOC.

The letter also listed the following alleged issues at DOC:

* “Director Brennan has erected a wall and has forced the personnel to choose sides. Her side or the warden’s side. It is very clear that she has no trust in any of the employees of this Department other than a certain few who are advising her.”

* “Director Brennan has completely removed all decision-making from the warden who is the highest-ranking officer of this Department, to include all command staff.”

“We are forced to seek approval from the Director for anything we need in this department. Such as days off, work orders (maintenance, repairs, etc). The warden is not able to change personnel around from different shifts to meet their personal issues or operational demands nor is he allowed to change anyone’s days off.”

* “Officers are working 24-hour plus shifts most of the time alone. Director Brennan’s main concern is controlling overtime. Therefore in doing so, she has caused an already short-staffed department
to operate as a skeleton crew leaving one officer per post with more than 50 inmates in that housing unit.

* “Retention rate of the officers in this department is at all-time low. Currently, a total of 39 officers have resigned, retired or have transferred to other agencies since Director Brennan took over.

The letter also mentions a supposed Brennan off-island training trip, saying the DOC director was “diverted” to Las Vegas to attend a softball tournament meeting three of her “favorable” employees along with her husband who is the coach of the team, while denying others to go on leave.

“Director Brennan has placed officers on administrative leave without serving a notice of investigation which is the procedure in any administrative case concerning violations of the rules and regulations,” the letter stated.

The letter added that when Sen. Telena Nelson toured the halfway house because of the recent escape and the Hagatna detention facility hub to address the erroneous releases that took place, she was not permitted to enter the briefing room during shift change to see that only seven officers reported for duty for that particular shift.

“Director Brennan is painting a picture to the legislature as if the Department is running fine.”

In response to the DOC open letter, Adelup issued a statement saying problems have persisted at DOC for years: “So we are not surprised that there are strong institutional forces resistant to change. While no one can test the personal or political motivations of an anonymous letter, we expect our Directors to bring people together and lead. That said, strict whistle-blower protections are already in existing in law, and the CSC exists to protect employee rights. All government employees should feel welcome to exercise their rights and file a formal complaint.”