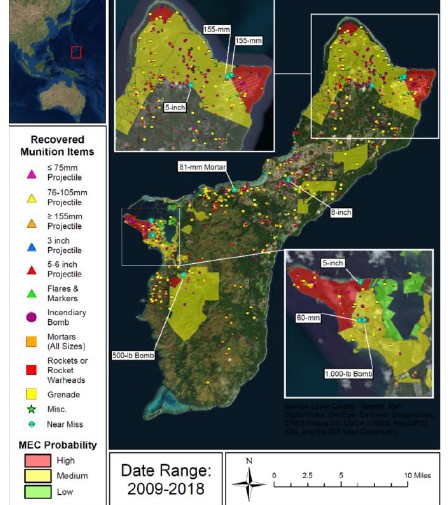 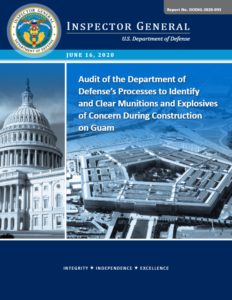 A Defense Department Inspector General report has concluded that military authorities on Guam “did not properly plan and manage” the disposal of unexploded ordnance on island resulting in roughly $100 million in construction cost increases between fiscal year 2015 and 2017.

According to the report an estimated 11,000 unexploded Japanese and U.S. bombs and other munitions, left over from World War II, lie scattered throughout Guam.

They range from 20-millimeter projectiles to 1,000-pound bombs. They are known as ‘munitions and explosives of concern’ or MECs.

Among the issues cited in the audit are:

• DoD personnel did not always agree on how to interpret the scope
and applicability of explosives safety standards when performing MEC
clearance procedures for military construction (MILCON) projects.

• JRM and NAVFAC officials did not provide appropriate resources or
alternate funding sources for MEC clearance and monitoring of MILCON
projects to ensure that contractors followed the proper standards.

• Navy policies did not provide JRM officials the flexibility to manage
risks related to MEC clearance by obtaining deviations from explosives
safety standards in a timely manner, nor did the policies provide a way
to propose alternative methods for MEC clearance that could potentially
reduce safety risks to contractors.

*And because of the delays in completing critical MILCON projects, DoD officials are unable to conduct joint exercises in the region, decreasing readiness and negatively impacting DoD operations.