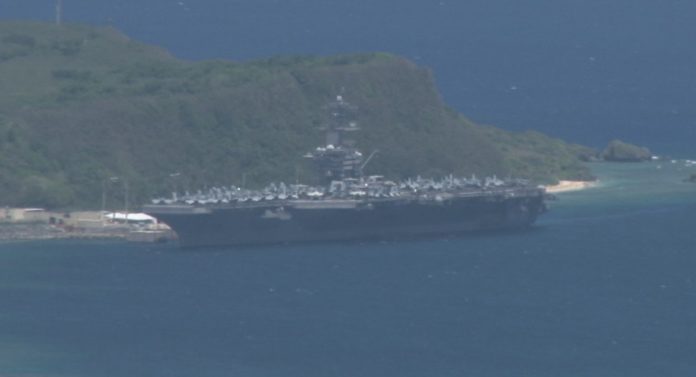 It “may take a little more time” to get the USS Roosevelt back out to sea according to Assistant to the Secretary of Defense for Public Affairs Jonathan Hoffman.

During a briefing at the Pentagon Friday Hoffman said “We do want to get to a place where there is zero infections on the ship and the entire ship’s complement is back at sea.”

He was responding to a question about the 5 Roosevelt sailors who recently returned to the ship after quarantine but tested positive again for COVID-19. The had to be removed from the aircraft carrier again and placed in isolation at Naval Base Guam.

“This is a very stubborn infectious disease,” said Hoffman. “We’re learning a lot. We’re taking every step possible to get the ship fully cleaned and fully ready.”

Click on this link to hear Hoffman’s remarks about the USS Roosevelt >>> https://www.c-span.org/video/standalone/?c4876268/user-clip-hoffman-roosevelt’ allowfullscreen=’allowfullscreen’ frameborder=0></iframe>

One, there were five sailors on the Roosevelt that have retested positive. What does this tell you about, sort of, the testing and the ability for the military to get its troops, and particularly sailors, back on the job as — as you go forward?

So with regard to the — the Teddy Roosevelt, I think we would — we would all acknowledge that this has been a learning process. And so the department, and particularly the Navy, have learned much over the last few weeks on how to confront outbreaks on ships. Fortunately, this has only affected at this time two ships, and as we saw with the USS Kidd, maybe those lessons learned allowed the Navy to move very quickly.

But it also shows us that what we’ve — what we’ve known for a long time is that this is a very stubborn infectious disease; that we’ve taken steps, and walking through the steps that the Navy has taken include removing those who are symptomatic, removing those who have close proximity to people who are symptomatic, testing the entire crew, cleaning the crew, quarantining the crew, and then putting people back on the ship.

The good news is that in this case you had a few individuals who showed symptoms. Because of the medical testing and the medical surveillance that we’ve put in place, they quickly were alerted, the medical crew on the ship. They were tested. They were removed from the ship and quarantined. That we did tracing to identify others who had been — were near them and tested them, and then did the same to identify others who were near them. So a process was put in place to quickly address the issue.

So, as I said, it’s a stubborn disease. We’re learning a lot. We’re taking every step possible to get the ship fully cleaned and fully ready.

I’ll just note, as we’ve said from the start with regard to the T.R. is that — and that the — Chairman Milley said up here a number of times — that the — the T.R. could be at sea tomorrow if it were called upon and would be able to fight through this outbreak. But we do want to get to a place where there is zero infections on the ship and the entire ship’s complement is back at sea, and that may take a little more time.