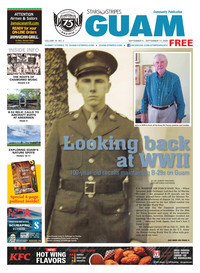 Stars and Stripes, the venerable 159-year-old independent newspaper serving U.S. military personnel in U.S. bases worldwide, was ordered to shut down by the Department of Defense but President Trump later reversed the decision.

The newspaper is widely distributed here on Guam, inside and outside the bases. It even publishes special “Guam supplements” regularly that serve as primers for newly arrived U.S. personnel on Guam.

According to Oriana Pawlyk of Military.com, the Pentagon in February proposed cutting all of the newspaper’s funding — roughly $15.5 million annually — to reallocate those dollars toward other high-profile programs, such as space, nuclear and hypersonic systems.

While the paper, which is distributed to U.S. troops stationed at bases worldwide, maintains editorial independence, it receives federal funding as part of the Pentagon’s Defense Media Agency.

The DoD order prompted a bipartisan group of 15 senators to write a letter to Defense Secretary Mark Esper, urging him to maintain support for Stars and Stripes, which would have been forced to stop publishing by the end of September without DoD funding.

“Stars and Stripes is an essential part of our nation’s freedom of the press that serves the very population charged with defending that freedom. Therefore, we respectfully request that you rescind your decision to discontinue support for Stars and Stripes and that you reinstate the funding necessary for it to continue operations,” the letter stated.

A number of Guam-based journalists have worked for Stars and Stripes. The Guam edition of the newspaper also carries local advertisements and “guide” articles about the island such as where to eat and what activities are available.

In reversing the DoD decision, President Trump tweeted: “The United States of America will NOT be cutting funding to @starsandstripes magazine under my watch. It will continue to be a wonderful source of information to our Great Military!”