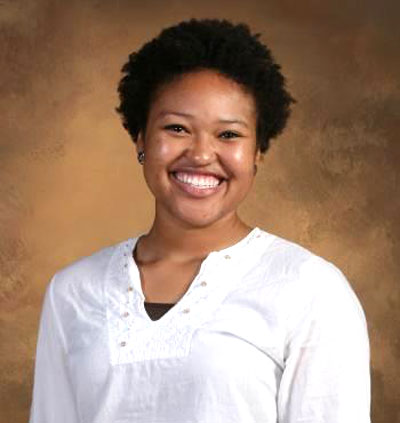 Brooks attributed much of her success to her father Stuart Brooks, a computer technician, and her mother, Air Force Col. Kim Brooks, who is the Andersen Air Base Maintenance Group commander.

“Of course, I would not be the person I am today without the nurturing, guidance, and encouragement of my parents,” said Brooks, who will attend Brown University this fall to study Biomedical Engineering. “It is because of all of the experiences and lessons they have provided me that I have even gotten this far.”

The 17-year-old DoDEA Pacific student grew up legally blind, a topic she expounded upon in her essay to the National Achievement® Scholarship Program.

“Even though being blind is not usually something people appreciate, I am blessed to have suffered this illness at a young age and to have been able to recover from it,” Brooks wrote. “It is because of my blindness that I have learned not to take the things I have for granted and that hard work and perseverance can cure what may seem uncorrectable. My situation was unique in that most people are not born with a disability, or have a disability that can be corrected through the use of modern technology.”

Brooks is the National Honor Society president for Guam HS, has a 4.191 cumulative grade point average and carries a rigorous schedule of three Advanced Placement classes. AP classes in high school are considered college-level courses. Students who score well on end-of-year AP exams can earn college credit at most colleges and universities in the U.S. Brooks also attributed her success to the multitude of teachers she met around the world, especially her Guam HS guidance counselor, Rolyn Hollister.

“It takes no hesitation for me to state that Mrs. Hollister has been my best guidance counselor by far,” Brooks added. “Despite the title, she has been the first guidance counselor that I have felt comfortable going to when I am in need of assistance. From the first day I arrived at Guam High School, she worked hard to ensure that I was on the best path I could possibly be on.”

About DoDEA Pacific:
The first organized schools for the children of U.S. military personnel serving in the Pacific were established in 1946 during post-World War II reconstruction. Throughout the decades, DoD schools evolved to become a comprehensive and high-performing K-12 school system solely dedicated to educating the children of America’s heroes. Today, DoDEA Pacific’s 50 schools serve over 23,500 children of U.S. military and eligible DoD civilian personnel families stationed throughout the Pacific theater.