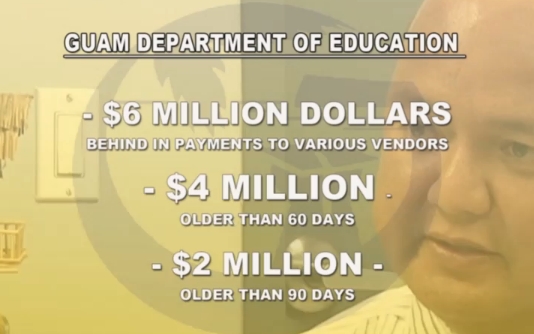 DOE was unable to pay the Guam Power Authority for their services, which led to the cutting off of power at their central offices in Tiyan. PNC spoke with the DOE Superintendent today to find out what happened and if the situation was resolved. It turns out that GPA isn’t the only DOE vendor that is owed money.

Guam – It was lights out at the Department of Education for a short period yesterday because they couldn’t pay the Guam Power Authority on time.

DOE Superintendent Jon Fernandez says, “Yesterday before noon the power was cut off here at the Tiyan central offices. It didn’t affect any of our schools, but when the power went down, our generators kicked in and we were able to continue business for the rest of the day.”
DOE Superintendent Jon Fernandez says he doesn’t anticipate anymore issues with GPA. Fernandez is glad that GPA was prudent enough to disconnect power to the central offices instead of the schools. Fernandez assured that DOE will continue to work closely with GPA and the Department of Administration to make sure payments are made in a timely manner.
He says, “My finance staff were in touch with both DOA and GPA to ensure that we address the outstanding issue of payment for June and July and we received a check from DOA and shortly thereafter crews switched the power on.”
Back in June, DOE faced lawmakers in a round-table meeting, where DOE brought up the struggle to pay vendors and asked DOA to release $13 million in reserve that were needed to cover operations in FY15. Fernandez gives us an update. He says DOE is still about $6 million behind in payments to various vendors. He tells PNC that two-thirds of the unpaid invoices are older than 60 days, which amounts to about $4 million dollars. Invoices older than 90 days totals to about $2 million dollars.
Fernandez sent another letter to Adelup a week ago…he says, “Basically seeking the release of the reserves so that would enable us to receive the necessary allotment authority and the cash to continue to provide payment to any number of vendors and services through the rest of the fiscal year. With that shortfall and our inability to catch up, we are juggling between various vendors, some of which have outstanding payables that are over 90 days old. It’s not a good position to be in and we continue to work with DOA and GPA to keep services flowing. I definitely don’t want it to affect our schools.”
However, Fernandez is hopeful as we draw closer to the new fiscal year, which starts October 1st. He says, “Our appropriations next year sets aside about $13 million dollars in one-time funding from a bond refinancing that would help us tackle that payable issue. So it’ll help us catch us with what is owed to vendors. That $13 million will go a long way to resolving the problems we’re seeing right now.”
To help GPA reduce power usage, Fernandez confirmed with PNC that he will be sending a directive to all schools and divisions soon to shut off air-conditioning units and lights when school is out.