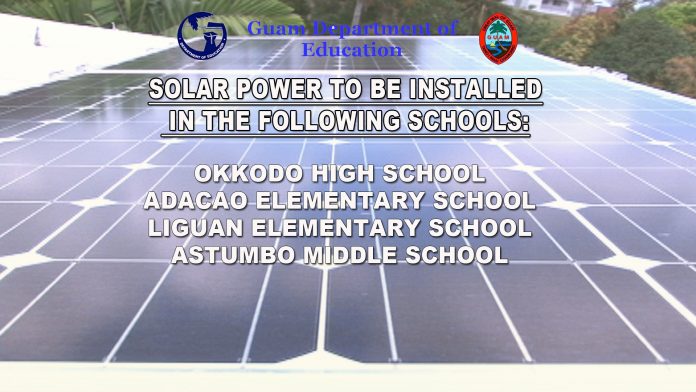 Department of Education is moving on to brighter things…like solar power.

Fernandez says, “We’ll be buying the power from that vendor, about 80% of our needs, at a discount to GPA’s current prices. The agreement will help us save money, promote sustainability on our island, and will give our students a chance to see sustainability and STEM at work at their schools. We’re working with the vendors to provide a kiosk for the students to be able to interact and see how the system works.”

Fernandez says they’re hoping to get solar power up and running by the end of the year and that they’re just waiting for the for the Attorney General and the governor to do a final review of the agreement. Fernandez explains that the agreement was a fairly speedy process thanks to a special legislation that allowed DOE to work directly with the landlords to procure solar power without having to go through the government procurement process.
Fernandez says, “We’re very excited to do this. We’ll be among the first government agencies to move forward in solar power and I think it’s exciting to get this moving now.”
Fernandez says he’s looking forward to adding more schools on the solar power list in the near future. He says, “We are also working with the landlords for JFK, which is CAPFA, and Tiyan High, which is Core Tech, to facilitate solar power on those lease schools as well. So it’s an exciting time to see how we can be conservative with our resources as well as promote education opportunities for our students.”