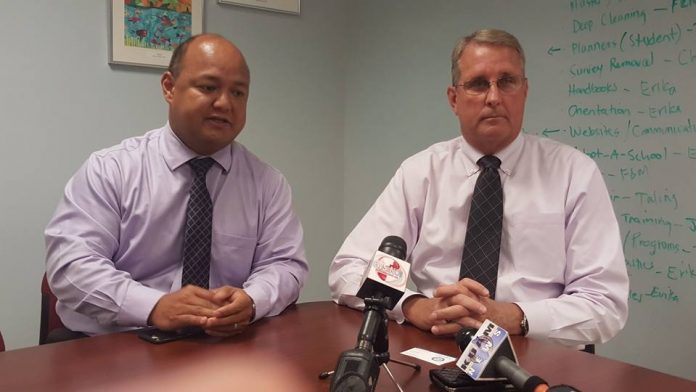 A Western Association of Schools and Colleges accreditation team is on island to take a look at some GDOE schools in hopes of getting all the schools accredited as a district level.

Guam – All eyes are on Guam schools, at least when it comes to the very first district accreditation.

What was just an idea about 4 years ago for the Guam Department of Education is now starting to pick up steam. DOE Superintendent Jon Fernandez says he hopes to get all DOE schools accredited by the year 2020 with the help of the Western Association of Schools and Colleges. A team of WASC representatives are on island for a week to visit a few schools.
WASC Executive Director Fred Van Leuven says, “We have scheduled the very first thing we’ve ever done is the district accreditation. So there’s two different issues. One is all the schools are coming online, and then we’re looking at trying to help the district go through a process which we’ve had our WASC staff and DOE staff to develop a system where they would be able to look at themselves as well as what’s going on in schools.”
DOE and WASC are working together to accredit three schools every year. Van Lueven says, “What’s happening with the elementary schools, these new schools coming on, they have an initial visit, which is a one-day two-member team that come in and make sure they have the infrastructure to be able to do a complete full self-study that they have to do in three years. All the other schools that have been on that have been doing it up to this point. We’re on a six-year cycle and they have different accrediting statuses in between that so that’s what happening at that level. At the district level, we’re taking some of those same components but we restructured everything.”
Fernandez says this year, the team is looking to get Liguan, Price and CL Taitano Elementary Schools accredited. Meanwhile, Astumbo Middle School is undergoing a full self study, and Southern High School and Benavente Middle School are in mid-cycle review. Van Leuven says he has noticed a lot of improvements over the years in school infrastructures and collection of data. He says, “There’s a lot more information and a lot more time set aside to do an analysis. It’s evolving from a very limited data from looking at SAT10 scores, now you’re looking into many different things and you’re trying to figure out how kids can do better.”
Fernandez explains that this process helps DOE tremendously. He says, “The other component of it is accountability and transparency so it’s always easy to come up with strategies, but what we’re looking for is get experts outside our system to come and look at what we’re doing, give us input, and if there are things we need to do to improve, what they do is write it up as a report, so it’s documented, public, and something we can use as a road map in improving.”
Van Leuven says, “This is the exciting part because there are questions being asked and there are  discoveries and they’re figuring out how to be better at it which is what it’s all about.”