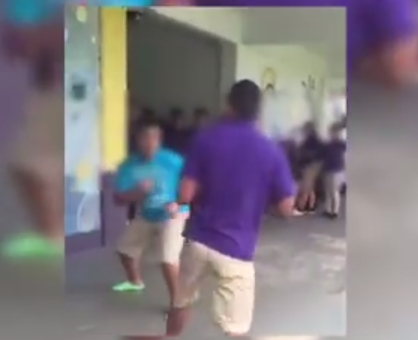 A school fight video that circulated on social media might mean something more than just a fight.

Guam – The first ever fight video of the school year spread like wildfire on social media.

Two students are seen throwing punches at each other at what appears to be at George Washington High School while other students stood aside and watched.

Guam Department of Education Superintendent Jon Fernandez confirmed that this incident took place last week at the Mangilao campus. Fernandez says after viewing the video, he was very disappointed. He says, “It’s kind of frustrating at this point because we know there are things kids are calling ’10 second fights’ so not matter where you are, if kids are insisting that they’re going to stage these fights and do it over 10 seconds, it’s almost hard to react, so our short-term strategy is to make sure we’re aware of these incidents.”

Fernandez says administrators at the school took the appropriate action against the two students and even contacted their parents. He says as a short-term strategy, DOE is working with the Attorney General’s office, the Guam Police Department, and other agency partners to prevent future fights on campus. Fernandez says although he highly discourages this type of behavior, he says these fight videos actually help the department.

He says, “We have an opportunity to address those issues that impact the education of our students and safety of our school. What the videos help us do is identify anyone who might be instigating, encouraging and betting those fights.”

As part of Fernandez’s long-term strategy, he wants to change the behavior of the students to make sure they’re confused on better ways to resolve problems.

Fernandez says, “It’s a constant challenge though because we know it’s not something that just happens in schools, but in the community as well. I hope that all our agency partners assist us as we try to continue to change their behavior. I will also say that this reflects the actions of a minority of students. Most students at school aren’t involved in these incidents and are focused on getting educated. It’s just a minority of students that need to be addressed and we’re working hard to do that properly.”