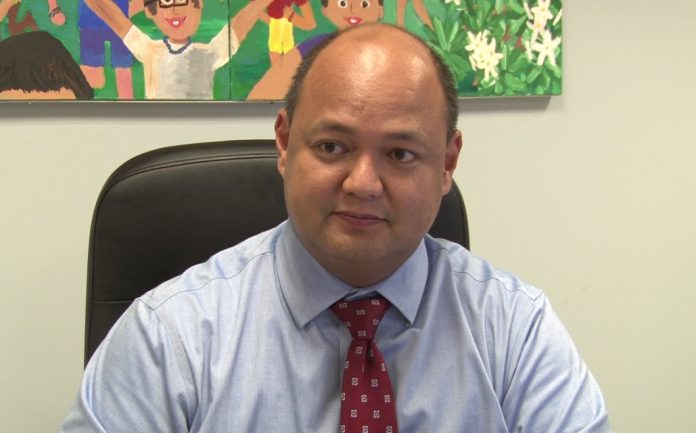 The Guam Education Board will be going to executive session tonight to approve, disapprove, or ask for an extension to the Department of Education Superintendent’s letter to renew his contract for four more years. DOE Superintendent Jon Fernandez sent a letter to the board back in September expressing his interest in continuing his employment, but now the decision is in the board’s hands.

Guam – The Guam Department of Education Superintendent Jon Fernandez’s contract is up for review by the Guam Education Board tonight. Fernandez says the board will decide whether to extend his contract before it expires so that there can be a smooth transition in the event the board rejects him.

He says, “Tonight there’s a special meeting the board has called to discuss my letter requesting or letting them know that I would like to renew my contract. My contract expires June 30 of next year, so in advance trying to plan for the school year, so that we don’t have to do this late in the school year. I thought I’d like to let them know that I’d love to renew, to continue the work I’ve been doing for DOE. If they agree, then we can settle that now.”
GEB Chair Peter Alexis Ada says the vote may or may not happen tonight, depending on what happens during the executive session. He says, “The committee this evening will report out its findings and there’s going to be three choices: approve it, disapprove it or we don’t have a position, we may want to extend for whatever reason.”
Back in September, Fernandez sent a letter to the board expressing his interest in continuing to serve as DOE Superintendent. Ada says Fernandez did not ask for a change in his contract, but only for an extension. Under the current contract, Fernandez’s salary is at 150-thousand dollars a year. “My understanding and he is not asking for a penny more. He says he wants to stay within the same contract, however, I am hearing some board members with some concerns about a few language inside the current contract that they might want to see should they decide to offer him a renewal,” he says.
If board members choose not to vote tonight, Ada hopes they would have a better understanding in January when Fernandez is up for evaluation. Ada says he received a total of four letters of support. The letters are from Governor Eddie Calvo, the Guam Education Foundation, Senator and former DOE Superintendent Nerissa Underwood, and the Guam Chamber of Commerce.
Fernandez says, “I finished over three years on this term. That makes me that longest serving superintendent since Gloria Nelson and Catherine Aguon back in the early 80s. Because of that, I put in a lot of time and effort into keeping the department stable and keeping us focus on long term improvement.”
Ada says, “I will not deny. I am in support of the superintendent for one purpose: for continuity. We have the high risk visit from US DOE here. We need to become much more stable. We have to take a look at the children and the department there has to be some consistency. Are there problems in the department? Of course but you cannot isolate that problem to one person because many of the problems are inherited problems.”
Education Board Member Maria Gutierrez says she was frustrated at yesterday’s meeting. Gutierrez says the board ignored her request to allow public comment in the meeting. Other board members raised legal questions that couldn’t be answered on the spot, so the vote on the contract will be delayed until December 16th.