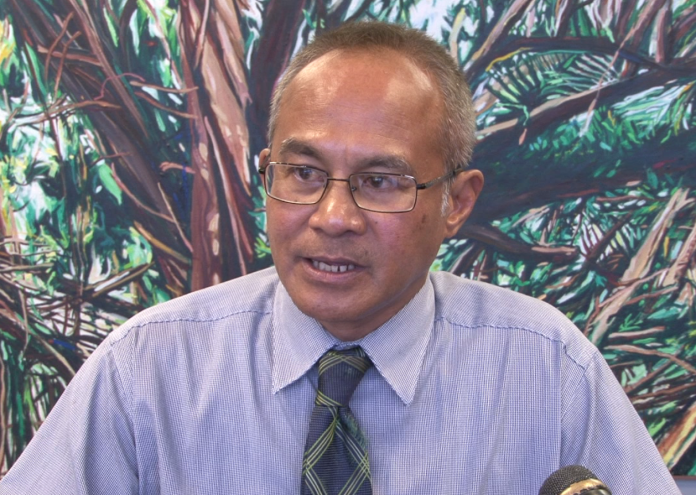 “I do have serious concerns because it smells like collusion, and I think that’s why things got a bit heated yesterday,” shared the Ethics Chairman.

Viewers may recall that lawmakers clashed over Resolution 239 yesterday.  The measure states that Republican Senator Jim Espaldon engaged in unethical actions involving a Saipan-based company, in part for his “own personal gain.”

The crux of the debate stems over whether the resolution should move forward or be dropped entirely.

Only two members of the Legislative Ethics Committee explicitly voted in favor of moving the resolution forward. Senator Michael San Nicolas suggested the lawmakers follow their own legislative rules, which requires four affirmative votes for a resolution to proceed.

But the Ethics Chairman explained that the voting sheet does not accurately reflect the committee’s intentions.

“The technicality was that it was made known to us on Friday that we did not need the voting sheet at all, but since the voting sheet was with the record, we had to address it. There was a plan to make the corrections necessary per recommendations from legal counsel,” Esteves explained.

During yesterday’s session, two senators admitted that there was some confusion on the voting sheet. Both Senators Regine Lee and Telena Nelson stated they had every intention to move the resolution forward for the body’s disposition.

But the lack of the required affirmative votes had the legislature divided. Some senators demanded transparency, calling for a vote on the resolution. Others called for a strict interpretation of the rules, and proposed the resolution be placed in the inactive file—effectively killing a possible censure and Sen. Espaldon’s removal from leadership in the Legislature’s Republican minority.

Even Senator Espaldon broke his silence on the matter, and told his colleagues that to proceed with the resolution would be “totally unfair.”

“It was a bit surprising,” recalls Esteves. “And I think the most surprising is that it was brought up by a senator who had never even reviewed the record. The senators all had the opportunity to review the record in its entirety and I do have serious concerns because it smells like collusion.”

There was also considerable debate as to whether the public deserved to know the findings of the ethics investigation. PNC asked the Ethics Chairman if he believed the results of the investigation will ever be made public.

“As of right now, I don’t believe that there is [a chance], I can’t answer in totality. Legal counsel or the speaker will probably be better to answer that question,” Esteves said.

Each and every ethics meeting took place behind closed doors. The media and the general public are currently not privy to the details of the ethics investigation.

“The ethics committee is not the adjudicating body,” reminded Esteves. “We don’t pass final judgment. We just do an investigation, gather facts, make a recommendation and it’s up to the body to ultimately decide at 10 votes.”

Resolution 239 has been referred back to the ethics committee.