Guam – Guam Animals in Need [GAIN] reports that Guam police contacted them Friday following their chop shop raid in Dededo and asked GAIN to come and care for some caged dogs.

Caked in red mud, imprisoned in a four foot by six foot cage, Nora caught the eye the Guam Police Department after they made a raid on the suspected “chop shop” last Friday.  Noticing the dog was caged with no food or water, the officers called Guam Animals In Need to assist.  As they ventured around the back of the house, Natasha was found tied on a short, four foot lead to a stump at the edge of the boonies.  Natasha was also covered in mud and looked as though she hadn’t been cared for in months.  The officers called GAIN because it was a holiday and the Department of Agriculture was closed. Shelter Manager Bambi Leone and Animal Caretaker Arlene DeCastro drove to the site and picked up the two dogs, a mother cat and her kitten.

[ Guam Police Department called in Guam Animals In Need to assist with the pick-up of animals at a local “chop shop.”  Nora was housed in a four by six foot cage with no water or food, just empty bowls]

Leone said,“It breaks my heart, when I see animals treated like this.  Natasha was a big, healthy dog at one point.  You can tell by the collar she wore.  Now, she’s so skinny, it would go around her neck twice.  They both were so dehydrated that they didn’t want anything to eat when we picked them up but, they each drank four large bowls of water.  This morning they both showed healthy appetites.”

The future is unclear for these two dogs.  Leone said, “That’s the saddest part of it all and why this kind of animal abuse is criminal.  We’ll try to socialize them but, usually when dogs are kept in a cage or tied to a tree for their entire life, they become unacceptably aggressive toward people or other dogs and they are too dangerous to put up for adoption.  We’ll just have to wait and see with these two.”

If you’re interested in volunteering or you would like to donate to the shelter operating expenses, please contact GAIN at 653-GAIN(4246).  You can also use a credit card or debit card at http://www.firstgiving.com/fundraiser/valeriebock/membershipdriveforgain. 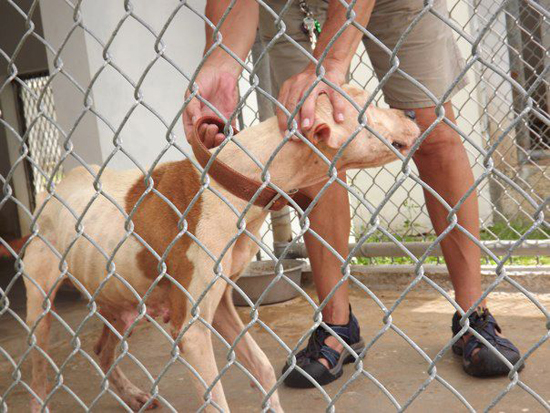 [ Natasha was rescued from a “chop shop” that Guam Police Department raided.  She was tied at the edge of the boonies on a four foot lead with nothing to drink or eat and nowhere to lay but the mud-hole beneath her feet]