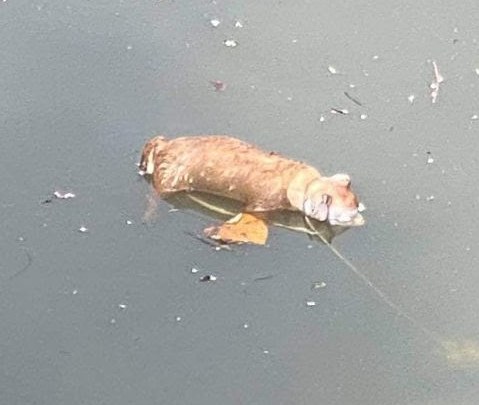 A dog was found dead yesterday afternoon in Talofofo, having drowned after being tied to a heavy rock and thrown off a bridge. Guam Animals In Need (GAIN) is issuing a reward of $2,000 for information leading to the arrest of the killer.

The body of the dog was spotted by a local resident running along Route 4 in Talofofo at 3 pm on Sunday. Halfway across the bridge, located near Jeff’s Pirate Cove and Ipan, he noticed a strange object floating on the ocean-facing side of the bridge. When he stopped to inspect, he realized it was a dog tied to a rock.

“I saw the body because it was low tide,” said the runner, who wishes to remain anonymous. He and his wife called 911 to report the incident, and GPD responded to begin an investigation. “This is such a horrific, vile and cruel thing to do to such an innocent animal,” said the wife. “We just don’t feel safe knowing someone who could do such revolting actions is out there in our neighborhoods. It’s sickening and worrisome. My heart hurts so bad knowing what torture that poor pet had to endure up until the end,” she added.

GAIN is offering a $2,000 reward for information leading to the arrest of the person(s) responsible for killing the dog. Anyone with information is urged to contact GPD, or GAIN at 653-4246 or info@guamanimals.org. For those wishing to remain anonymous and collect the reward, contact Guam Crime Stoppers at 477-HELP (4357) or guam.crimestoppersweb.com.

Based on preliminary pictures taken at the scene of the crime, veterinarians contacted by GAIN estimate the drowning occurred sometime between last Monday and Saturday. “We don’t know when exactly this happened. But if it was near low tide, the dog may have struggled to keep its head above water. I pray they didn’t suffer long,” said Cyrus Luhr, GAIN board president.

“Did the dog trust the person walking them to the edge of the bridge? At what point did they realize something was wrong? I can’t imagine the pain and terror this dog experienced in its final moments,” he added.

GAIN is urgently requesting that the Guam Police Department bring the dog’s body to the animal shelter, so it can be frozen and examined by the proper medical authorities to find more information, including scanning for a microchip. “We made the request and are awaiting word from GPD on the location of the body,” said Luhr.

GAIN reminds the public that it is a felony to cruelly kill pets. “If someone no longer wants their pet, please don’t kill them. You can bring any unwanted pets to GAIN and we’ll take them in for free,” said Luhr. “We are struggling with COVID19 impacts, so we may need to schedule non-emergency intakes, but we will always work with you to find a positive solution. Animal abuse and killing is never the answer,” he added.

GAIN continues to advocate for Bill 185-35, the PAWS Act (also known as Pugua’s Law), which is currently being reviewed by the Office of the Attorney General of Guam. Once adopted, the measure will modernize animal cruelty laws in Guam.

GAIN is also awaiting word regarding the investigation into Walter’s killing, a neighborhood pet whose throat was slashed in late July.