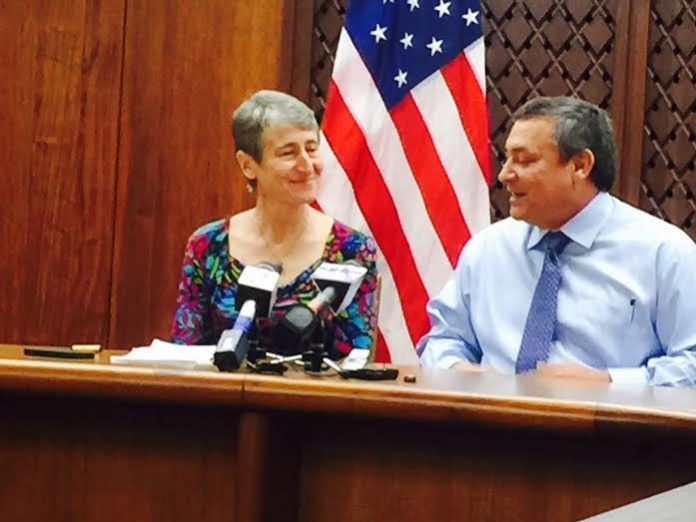 Guam – Department of Interior Secretary Sally Jewell is on Guam touring the island and meeting with local leaders. Jewell spoke to the island’s media this morning about her visit and her concerns about things like compact impacts and invasive species.

This morning DOI Secretary Sally Jewell met with Governor Eddie Calvo. “In short we brought up some of the longstanding issues both in compact impact as well as some of the regulatory requirements that are put forth to the island that are so onerous and so expensive,” said Governor Calvo.

Secretary Jewell spoke to the island’s media about some of her concerns with invasive species particularly the Coconut Rhino Beetle and the impacts of the compacts of free association.

“Compact impact on the people of Guam and the budget of the government here is very significant and that’s something that’s been on my radar consistently even since I was going through my confirmation process,” said Jewell.

However as far as compact impacts are concerned the DOI can’t ask for more than the $30 million that is appropriated annually and split up amongst all the areas that have compact migrants. Assistant Secretary Esther Kia’aina explained saying “There is by statute under the second compact agreement a provision that caps mandatory funding at $30 million until that is statutorily changed we are barred from seeking increased funding under that measure,” said Kia’aina. However, Hawaii Congressman Mark Takai has introduced a bill that Congresswoman Bordallo has co-sponsored to lift that cap to $185 million dollars.

Secretary Jewell also spoke about the FAS migrants who were denied FEMA assistance after typhoon Dolphin. “When FEMA addressed the needs with typhoon Dolphin they specifically excluded citizens from the Freely Associated States because of the Welfare Reform Act of 1996 and I don’t think that was probably the intent I suspect it was an unintended consequence when that law was passed but that is the interpretation of the law as it now stands and a good example of what we can use as to why we think this is something that needs to be revisited,” said Jewell.

The DOI secretary also visited the War in the Pacific Park Asan overlook on Nimitz Hill where she layed wreaths and she visited the War in The Pacific beach park in Asan which has been ravaged by coconut rhino beetles. At the park she meet with kids who are in the National Park Service’s summer junior ranger program who were cleaning up the debris in the park to help combat the rhino beetle.