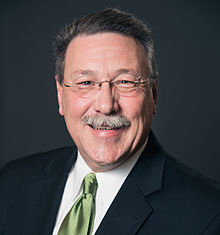 Doug Domenech, who served as Interior Acting Deputy Assistant Secretary for Insular Affairs in the George W. Bush Administration, was introduced at his confirmation hearing.

Washington, D.C. – President Trump’s pick to head the Interior’s Office of Insular Affairs was both praised and criticized during his confirmation hearing before the Senate Energy and Natural Resources Committee.

Radewagen stated, “I can think of no one I’d like to see in the position more than Doug Domenech. His knowledge and experience of the region and mission of the office is unparalleled and I know that his leadership will be welcomed, as we seek to craft real solutions for the constituents we serve.”

Radewagen pointed out that Domenech met with each of the territorial representatives before his hearing. Domenech was also endorsed by each of the island governors. But that did not save the nominee from sharp criticism by Energy Panel Democrat, Al Franken, who criticized Domenech for an earlier op-ed downplaying man’s impact on climate change.

Franken responded, “Well could you tell me right now, what particular studies you’re talking about?”

Domenech replied, “I can’t, off the top of my head. No, it’s not something I dwell on.”

“Did you find these studies on the prestigious internet?” asked Franken.

“I understand your point,” said Domenech.

Domenech still acknowledged the threat of climate change, especially to the islands, including the low-level atolls, and says he promised the governors and delegates he’d work with them on the issue.

The Trump Administration has reversed the Obama Administration’s focus on combatting climate change, bringing sharp criticism from Democrats, but the issue is not expected to stand in the way of Senate confirmation of Domenech.

Domenech is a top adviser to the Interior Secretary. He told Franken he’s spent a lifetime helping those dealing with the environment, including Virginia’s Secretary of Natural Resources. Domenech is also Secretary Ryan Zinke’s appointee to the Advisory Council of the Conservation Trust of Puerto Rico, from where Domenech and his family originated.