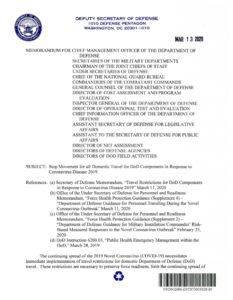 The Pentagon Friday announced the suspension of all domestic travel for members of the armed forces and their families in order to stem the spread of the coronavirus.

The travel ban takes effect Monday, March 16. It is slated to last about two months until May 11.

“This memorandum applies to all DoD military and civilian personnel and their families assigned to DoD installations, facilities, and surrounding areas in the United States and its territories,” states the memo which is signed by Deputy Defense Secretary David Norquist.

“These restrictions are necessary to preserve force readiness, limit the continuing spread of the virus,” states the memo “and preserve the health and welfare of Service members, DoD civilian employees, their families, and the local communities in which we live.”

Service members may take only local leave during the next two months, according to the memo. Civilian hiring at DoD installations has also been placed on hold.

Some travel exceptions will be granted “on a case by case basis,” and travel for medical services will be allowed, according to the memo.

The memo notes that “our understanding of COVID-19 is rapidly evolving, and this guidance will be continuously evaluated as conditions warrant.”

The department also announced new rules starting Monday for those who can enter the Pentagon building itself. According to a second memo from the department, all unofficial and international visitors will be “restricted” from the Pentagon grounds.

No military or government employees or contractors will be allowed to enter the Pentagon grounds “if they have traveled within the previous 14 days” from countries for which the Centers for Disease Control and Prevention has issued the highest or second highest travel warnings, per the memo.

Additionally, public tours of the Pentagon are canceled “until further notice,” the memo states — echoing the decision earlier this week to halt tours of Capitol Hill for the coming weeks, as sources have told CNN.

“All large gatherings, such as retirement and promotion ceremonies, shall cease,” the department said in a corresponding statement. “All Pentagon Tours have been suspended since March 12, 2020.”

READ a statement from the Department of Defense on the Travel Restrictions below:

Today, the Deputy Secretary of Defense David L. Norquist approved new travel restrictions for service members, DoD civilians, and their families assigned to DoD installations, facilities and surrounding areas within the United States and its territories. This restriction will halt all domestic travel, including Permanent Change of Station, and Temporary Duty. This restriction will also pause civilian hiring at DoD installations and components for persons who do not reside within the hiring entity’s local commuting area.

Additionally, service members will be authorized local leave only, following Service guidelines. This new guidance is effective March 16 and continues through May 11.

Similar to other travel guidance regarding COVID-19, travel exceptions may be granted for compelling cases where the travel is mission-essential, for humanitarian reasons, or warranted due to extreme hardship.  Approval authority for these exceptions belongs to the Combatant Commander, the Service Secretaries, the Chief Management Officer, or the Director of the Joint Staff, but may be delegated.

The Department will continue to issue additional guidance with regard to the COVID-19 as conditions warrant.  Our goal is to remain ahead of the virus spread so our military force remains effective and ready.

For more information on the CDC travel restrictions, visit https://wwwnc.cdc.gov/travel/notices/.

We encourage all DOD personnel to visit https://www.defense.gov/Explore/Spotlight/Coronavirus/for information on staying healthy during the outbreak.  The Department will issue follow-on guidance on this directive prior to implementation.