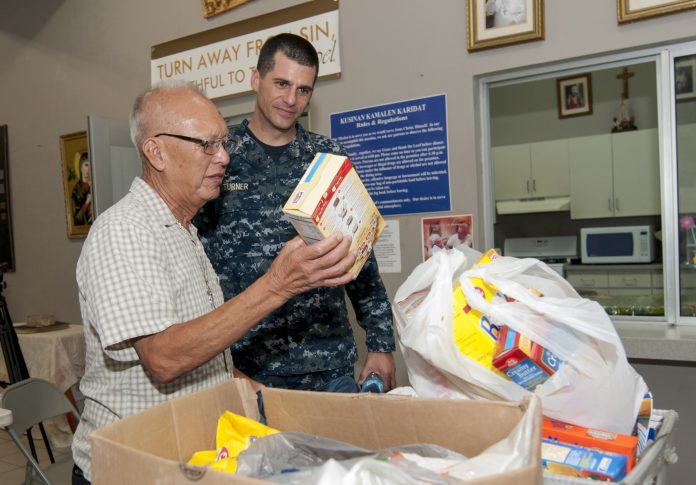 Santa Rita, Guam – (July 9) – Approximately 450 pounds of food and $3,000 was donated to local nonprofit organizations July 9 as part of the Feds Feed Families campaign.
The deliveries were made to Kamalen Karidat and Catholic Social Services on behalf of service members, federal employees, and their families. The campaign is a voluntary effort that collects nonperishable food items for distribution to local food banks.
Lt. j.g. Jason Turner, U.S. Naval Base Guam (NBG) chaplain, said the food drive is a great opportunity to give back to the island, and especially to those who need it most.
“The Feds Feed Families campaign is important because it affords the opportunity for our Sailors and civilians to participate in something that greatly benefits the community; a community that supports us year round,” said Turner, who is leading the drive on NBG. “It is always an honor to respond to the rallying cry of such a noble and humanitarian cause as hunger prevention.”
Deacon Frank Tenorio, general manager of Kamalen Karidat, accepted the donation and said he was grateful for the military’s efforts to help people in need on Guam.
“I’m touched,” Tenorio said after receiving the donation. “They come and help us without any condition – they just come and help us. They’re doing it for the island.”
The Feds Feed Families campaign was launched in June on Naval Base Guam and runs through Aug. 31. Drop boxes are located at the entrances to the NEX and Charles King Fitness Center, and by the exit at the Commissary and chapel on NBG. At the end of the campaign, another donation will be made to local food banks.