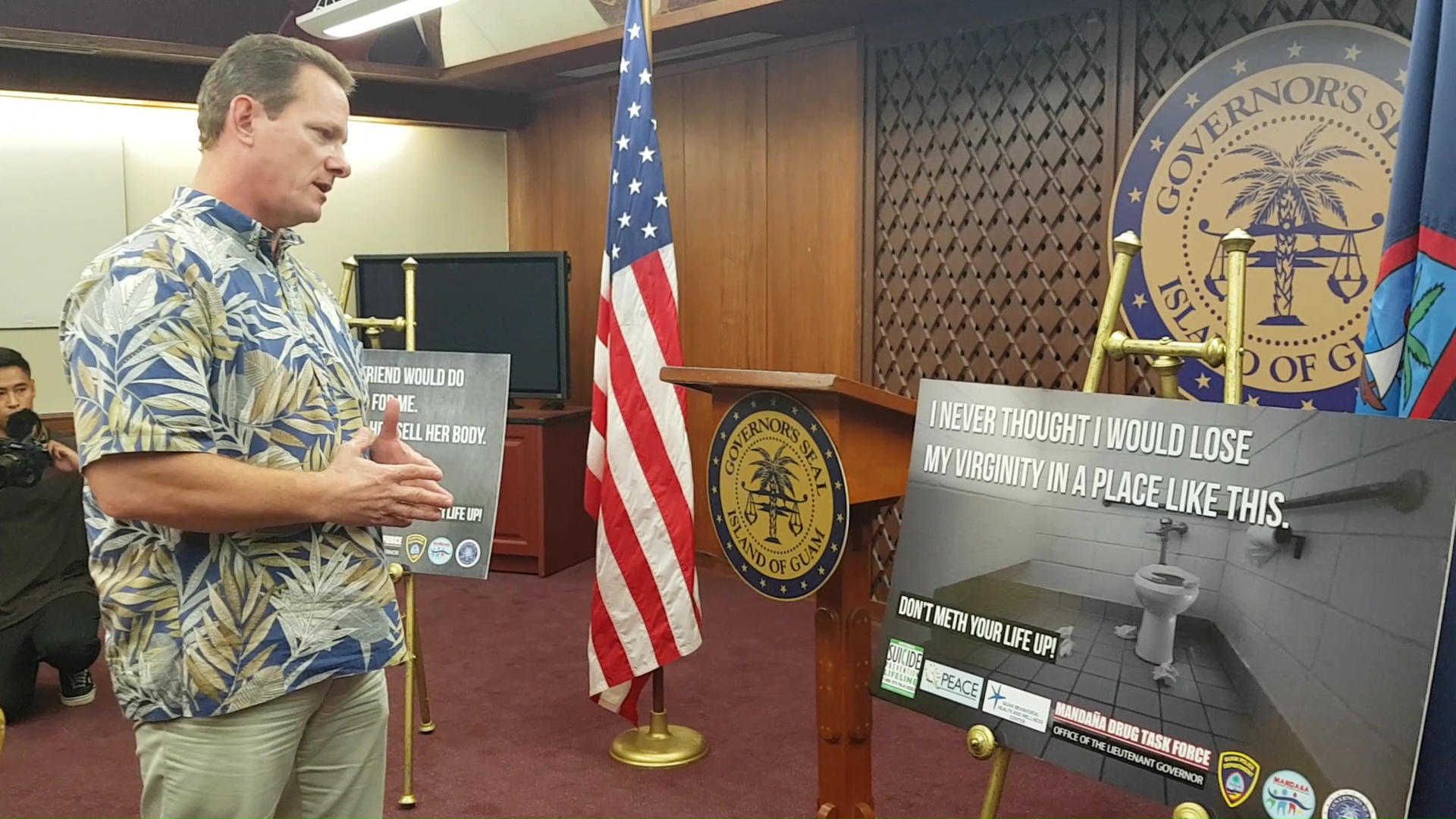 “Before I had a best friend, now I have a junkie,” one of the ads reads.

Guam – As tough as the Mandana Drug Task Force may be on drugs, they, along with the Lt. Governor’s Office, are also looking to soften their stance on drug rehabilitation and prevention with a new campaign called “Don’t Meth your life up.”

No, it’s not a lisp, it’s a pun. It’s the slogan to a new campaign launched by the Lt. Governor’s Office, along with other agencies like the Guam Police Department’s Mandana Drug Task Force, Guam Behavioral Health and Wellness Center, and non profits like Oasis Empowerment and New Beginnings.

“We’re taking the gloves off when it comes to showing the reality of drugs and the consequences it has,” announced Lt. Gov. Tenorio.

The campaign aims to reduce drug use and drug arrests on island through newly unveiled shock ads that have graphic messages.

“Before I had a best friend, now I have a junkie,” Tenorio read the first ad that was displayed during a press conference Friday.

“The next one we have is one that I really thought was amazing. ‘I never thought I would lose my virginity in a place like this.’ Again, the message is pretty remarkable,” read Tenorio, moving on to the third ad, “‘My girlfriend would do anything for me so I made her sell her body.'”

Chief of Police J.I. Cruz says the ads are meant to bring awareness to the realities and dangers of drug use.

“Rather than being reactive in dealing with people who are already using drugs, now we’re being proactive and these shock ads is our attempt to get in front of the problem,” he said.

While there may be an increasing number of drug arrests through the Mandana Drug Task Force, some even high profile, this campaign will give people a chance to solve the problem before it gets out of hand, said Cruz.

Benny Pinaula is the deputy director for the Guam Behavioral Health and Wellness Center.

“My message is very simple, you don’t have to get caught to get into the Mandana program. You can call our hotline at 647-8833 and we will help you,” remarked Pinaula. “Don’t wait to get caught. If you are suffering from substance abuse or you have an addiction problem, if you have a family member you’d like to help, call us, we are there to help you.”

Lt. Gov. Tenorio says this is just the beginning of the campaign and they plan to unveil more shock ads as well as use other methods in an effort to reduce the number of drugs and drug use on island.