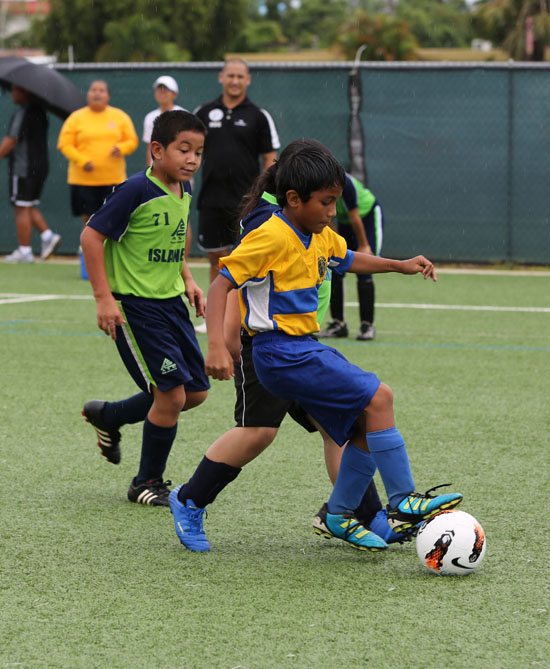 Guam – The Doosan Crushers and Mangilao Soccer Club remain undefeated for another week, as the top two teams in the Aloha Maid All Girls League settled for a 2-2 draw Saturday at the Guam Football Association National Training Center.

“I know the girls really wanted that last goal,” said Mangilao coach Ashley Besagar after the game. “I was telling them to take their time setting up plays to get better shot opportunities, but we just couldn’t take the lead after tying the score again in the second half.”

The Crushers opened scoring when Krystiana Martinez connected on a corner kick from Mia Santos midway through the first half. Moments later, Mangilao tied the game when Abbey Iriarte’s shot had just enough power to get past Santos’ hands when she was playing goalkeeper temporarily.

Santos redeemed herself early in the second half when she headed a Francesca Pangelinan kick-in into the goal to give the Crushers a 2-1 lead. The lead, however, was short-lived as Iriarte knocked in her second goal of the match after weaving through a few defenders on the left side to find her shot and knot the contest again.

With only a few minutes left before the final whistle, neither team was able to capitalize on various shot opportunities, including a free kick from Martinez that Mangilao’s Erlissa Delfin was able to block.

Although both teams stay atop league standings with two wins and one draw, the Crushers have the slight one-goal edge based on goal differential.

In other All-Girls League matches, Colleen Naden’s two goals led Samurai Heat to a 2-1 win over Quality Distributors. Felicia Alumbaugh scored Quality’s lone goal. The ASC Islanders Asut won by forfeit over its Betde counterparts due to an ineligible player.

In Chevrolet Robbie Webber Youth Soccer League games, the Wings defeated Community First 3-1, Quality Distributors Red blanked Quality Blue 3-0, the ASC Islanders Betde beat the Crushers 3-1, and the Strykers and Sidekicks played to a 1-1 draw in the U12A division. In the U12B division, the Wolverines and Sidekicks settled for a 2-2 draw, Quality and the Southern Cobras also battled to a 2-2 draw, Community First blanked Islanders Asut 3-0, the Strykers shut out Tumon 3-0, the Wings and Samurai Heat played to a 2-2 draw and the Crushers blanked the Islanders Asut 5-0.

In the U18A division, the Sidekicks escaped with a 4-3 win over Quality, Wings Red and Southern Cobras 2 battled to a 2-2 draw, and Wings Black blanked Samurai Heat 8-0. In the U18B division, Quality Blue held down Community First 3-2, Islanders Asut beat Quality Red 2-1, and the Wings shut out the Sidekicks.