Guam – Doosan FC picked up a 13-8 win over the Paintco Strykers and a 7-5 victory over the Pago Bay Disasters in Week 2 of the Land Shark Beach Soccer League to catapult the team to third place in league rankings.

Doosan put on its strongest goal-scoring showing in the third period against the Strykers, scoring seven goals to prevent the league’s defending champions from catching up in the final 15 minutes of the match. The match was level at 2-all at the end of the first period, but Doosan began to pull away in the second period, finishing with a 6-3 lead going into the final period at the Guam Football Association National Training Center beach court.

Despite the loss, the Strykers’ F.J. Chargualaf led all scorers with four goals. Camden Aguon finished with a hat trick for the Strykers and Jarrod Reyes scored his team’s other goal. Matt Robles led Doosan with a hat trick and teammates Allan Angoco, Arjay Valencia, and Cheyne Robles each scored twice. Gerry Lunod, Cameron Lunod, Luis Quichocho and Felix Fontanilla each scored once for the winning team.

In the day’s late match, the Disasters edged Doosan 3-2 after one period of play, but Doosan outscored its opponent 3-2 on a trio of goals from Quichocho in the second period to level the match at 5-5 going into the final period. Angoco lifted his team to the win, scoring the eventual game winner in the sixth minute of the third period and two minutes later connected on a throw-in from teammate Cody Cruz for the final score of the day.

The Crushers FC played back-to-back games, dropping its first match to the league’s frontrunner Quality Distributors FC 10-2 and later gave up a 5-3 lead to give the Strykers a narrow 6-5 win. 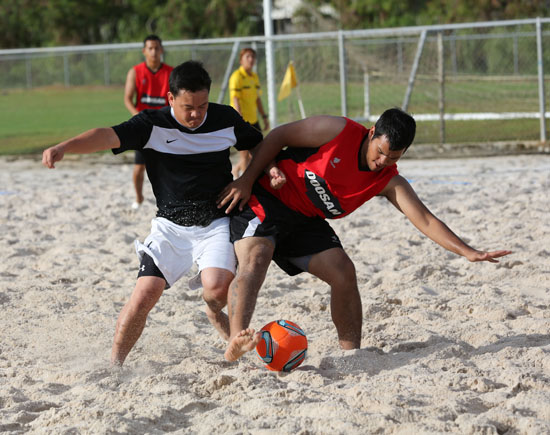 Jaime Ortega, leading scorer for the Crushers, scored once in the team’s loss to Quality. Chris Comerford scored the Crushers’ other goal. Quality was led by Philip Ogo’s hat trick. Ryota Nault and Andre Gadia scored twice and teammates Mark Chargualaf, Kaito Inoue and Josh Mendiola added a goal each.

Joshua Pangelinan scored twice for the Crushers against the Strykers and teammates Jon Odell, Ryan Shipman and Albert Toves each scored once. Aguon led the Strykers with his second hat trick of the day, including the game-winner in the 13th minute of the final period, and F.J. Chargualaf finished with a pair of goals for the winning team. Natsuki Recella scored the Strykers’ other goal. 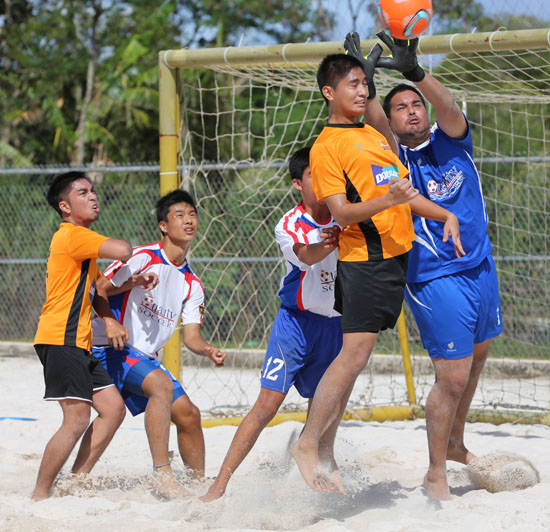 Beach soccer action continues Sunday with Quality taking on the Strykers at 2 p.m. The Disasters play back-to-back matches with the first one at 3 p.m. against the Crushers and next one at 4 p.m. against Quality. The Crushers and Doosan play the final match of the day beginning at 5 p.m.