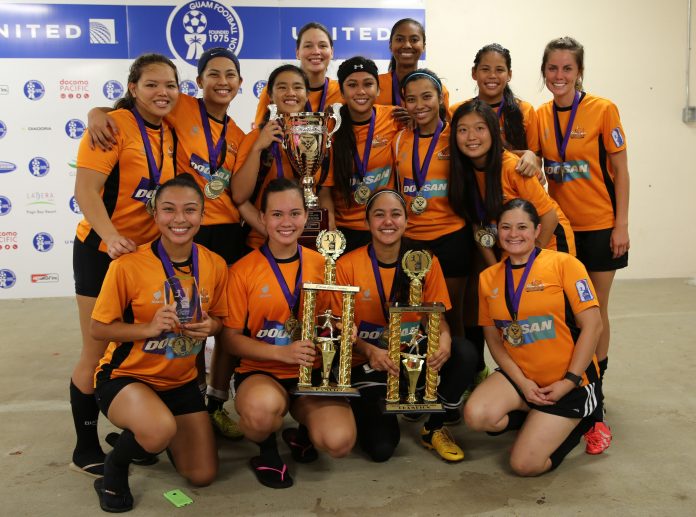 PRESS RELEASE – GUAM –During the awards ceremony, the Lady Crushers also received trophies as champions of both the Bud Light Women’s Soccer League Spring and Fall seasons and medals for each player. Skyylerblu Johnson also was recognized with a trohpy as the Bud Light Women’s Soccer League Fall Season Golden Boot winner. In the Women’s GFA Cup final, the Lady Crushers managed to take a 2-0 lead with goals from 15-year-old Colleen Naden; however, the Lady Rovers continued to take advantage of Catherine Kendall’s speed to stay in the match, which several times left the Lady Crushers defense scrambling. Catherine Kendall converted twice in the second half, including a long distance strike from the right side that leveled the match in the 81st minute. As both teams battled to evade extra time, it would be the Lady Crushers’ Simie Willter to pull through for her team in the 90+3 minute. Teammate Skyylerblu Johnson ran the ball up the left flank, momentarily lost it near the corner, managed to recover it from a Lady Rovers defender, and passed it to Colleen Naden who sent it to Simie Willter for the game-winner.