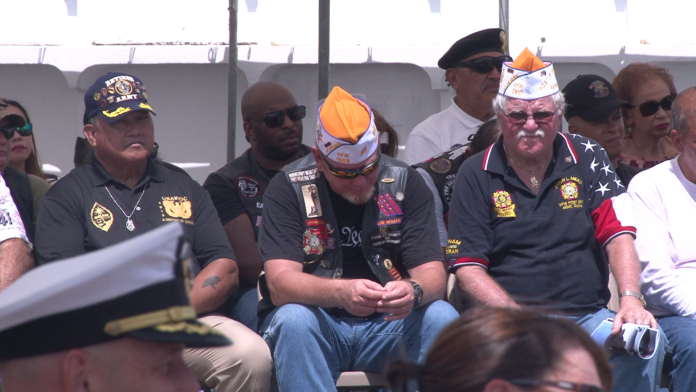 Guam – Continuing to remember those who fought bravely for our freedom, the National Guard also held a memorial service ceremony this morning at the Guam Veterans Cemetery in Piti.

Buried there at the veterans cemetery are thousands of service members who made the ultimate sacrifice to defend the freedoms we enjoy today.

The keynote speaker this year is Brigadier General Johnny Lizama who is the assistant adjutant general for Air of the Guam National Guard. He shared a touching story about his friend from the U.S. Virgin Islands, Lt. Col. Dave Canegata, who was killed while on tour with him in Afghanistan during Operation Iraqi Freedom.

With that story, he invited others to share similar stories they may have about their loved ones who served in the military.

“Each of you may have your own experience or know of a service member who died in service to their country. We share a few at home. I challenge you here today to tell that same story to everyone that you meet,” said Lizama.

Tenorio talked about the enlistment rate on Guam, pointing out that the island has the highest per capita in the nation. This, he says, is because the island knows what it’s like to be oppressed by enemy forces.

Tenorio invited guests to walk through the cemetery grounds to pay homage to those who died defending our freedom.

“Not many months ago I was walking down there. I don’t know if any of you have done the same thing but I invite you to do that. Walk among those grave stones. Look at the dates of when they died. They’re not buried here by accident; they put themselves in the service of our country. I invite you to look at those tombstones and those scripts. Look at their names and think about if you’re related to them or that you knew them, but more importantly that you respect them enough to give them time,” encouraged Tenorio.

During the ceremony, and Air Force B52 bomber flew over to remember those who gave their life in defense of our nation.