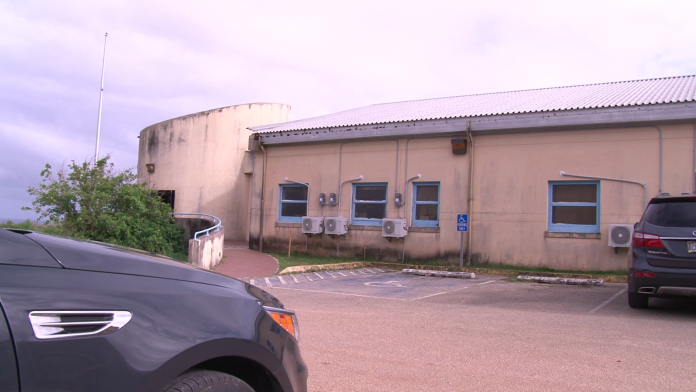 Saipan, CNMI – As thousands of residents gradually return to their homes in the CNMI following a devastating typhoon last October, one shelter remains open for survivors of Super Typhoon Yutu: Kagman Emergency Shelter.

The sprawling multi building facility had been designated an emergency shelter a number of years ago when it transitioned from being Saipan’s Juvenile Detention Center in the village of Kagman. Remnants of its penal past remain with wiring dangling from a control room ceiling and 20-foot fencing surrounding a central courtyard.

Today, it’s the last shelter standing for some of the remaining survivors of Yutu still without a place to call home—94 people still live here, some of whom may have no family to go home to even after the shelter closes its doors.

The Kagman Emergency Shelter opened on December 3, about five weeks after Typhoon Yutu devastated the island. That was when shelterees were transferred out of several school shelters to make room for students to return to school. At the time, the number of shelterees was in the 200s.

For Shelter Manager Lucinda Selepeo, operations have eased up as Saipan slowly returns to normal. But for those first few days after the storm’s passage, it was a traumatizing experience.

It was pandemonium as a deluge of residents stormed shelters in search of food, water, medicine, protection and hope.

“We didn’t have enough resources on island to get all of that, like everything, but at least we got something so we tried to ration the shelterees,” says Selepeo, as she describes some of the requests made to shelterees. “‘Please just wash your plates, just shower, you cannot wash your clothes, you cannot take a long hot bath.'”

“I tried to comfort them and talk to them and just let them know that it will come we just need your patience,” she explains.

But thanks to unsung heroes like Selepeo and aid from the federal and local governments, non-profit organizations, the business community and other individuals, no one ever went without food or water.

Nevertheless, the painstaking and interminable work of a shelter worker, who’s seen and experienced first-hand the despondence a colossal storm can bring, is often overlooked. She may appear stoic on the surface, but for Selepeo, it’s a discipline she must perfect in a situation that can sometimes feel so hopeless.

“You get to know your shelterees, you get to interact with them, you get to have feelings for them. So one way or the other as much as we wanna say no … it’s very hard and especially when you’re with them for a couple of months, it gets to you,” Selepeo shares.

For now the work continues. The shelter will remain open as long as there is a need for it, says Selepeo, who remains hopeful that everyone still here will have something to return to, something better and stronger than before—better and stronger homes, families, islands, people and lives.

“If I could house them myself, I would do that, I would,” says Selepeo.