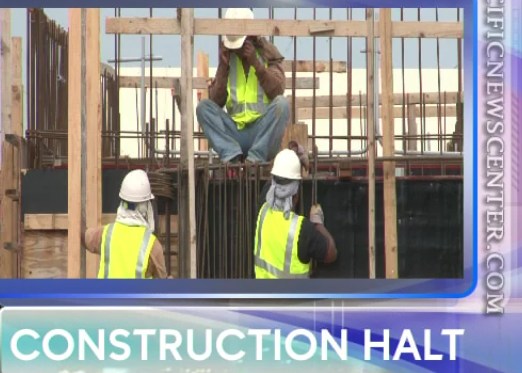 Adelup is shutting down all construction on the island starting at close of business tomorrow.

The move comes the same week that Black Construction reported hundreds of positive COVID cases among its employees followed by another cluster at CoreTech International.

Janela Carrera, the Public Health spokesperson, says they’ve started reaching out to other construction companies for testing, since subcontractors can go from one job site to another, potentially taking along with them the virus.

Since the industry relies heavily on foreign labor, many are living in close quarters and once there’s one case, the virus will spread like wildfire.

She says they’ll be testing on a daily basis until they get through at least CoreTech and Black Construction.

“So we have an outreach actually at CoreTech tomorrow (Saturday). We’re going to be testing approximately 500 of their workforce. And then from there, we’ll be doing testing of other…hopefully, the goal is to…test other construction companies. We’re reaching out to them,” Carrera said.

She added: “We are actually planning to set up our mobile lab…the same mobile lab that we utilized when we did the community outreach (in Zero Down and Gil Baza in Yigo). That way, we’re able to produce results within 5-15 minutes.”

GovGuam shut down construction previously, also because of an identified COVID cluster.

The last time was around a 4-day shutdown. However, Carrera says it could take longer this time… as they try to get through hundreds of employees.

CoreTech and Black each have a staff of about 1300 and Carrera says their mobile lab will get results out the same day.

She says the construction industry has been supportive of the move, recognizing the risk associated with more COVID-spread.