The Department of Public Health and Social Services has received 5,000 mosquito nets from the U.S. Centers for Disease Control as part of the response effort for dengue fever.

The nets arrived just before the declaration that Guam is free of the disease.

The governor is expected to provide a statement tomorrow to announce the all-clear.

Since 2019, there have been 23 dengue fever cases on the island, 15 of them were local and 8 were imported.

The nets are designed to last years and will help residents who live in substandard housing, says Public Health Director Linda DeNorcey.

“I just want to emphasize that Vestergaard is the world’s leading producer of these long-lasting insecticidal nets. And the PermaNets – that’s the brand you see here – it offers a long range of other vector range these diseases such as malaria and dengue,” DeNorcey said.

Distribution of the nets will be held over the next few weeks. Residents who said they would like the nets during last month’s distribution of mosquito spray will be the first to receive the nets.

The nets will be available for pickup at sites in the northern, central, and southern parts of the island that will be designated by the Mayors Council and Public Health. 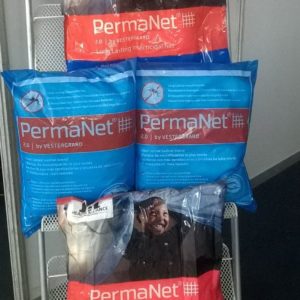