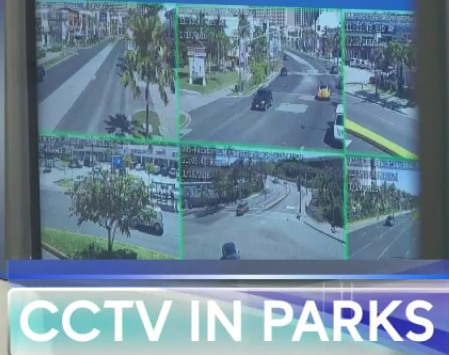 The Department of Parks and Recreation is gearing up for the installation of a solar-powered CCTV surveillance system in the island’s public parks to enhance safety and security.

Back in 2018, DPR received a $5.62 million grant from the Department of Interior to repair or upgrade park facilities islandwide.

Out of that number, $4.45 million had been allotted for the entire Phase II and one of those projects in the pipeline is the design and build of a solar-powered security surveillance system for multiple public parks.

DPR is still waiting for the Department of Interior to issue a notice to proceed for the project. Aside from the surveillance system, several Phase II projects — such as the basketball court enhancements and additional park lighting projects — are still waiting for the notice to proceed, which was delayed because of the current COVID restrictions.

According to DPR Chief Planner Jose Quinata, the CCTV system will be installed in 19 park locations all over Guam.

“We are installing solar-powered CCTVs at various parks islandwide. They are going to be mounted on existing lighting poles so there will be no new pole constructions that will bring up the cost to the project The public will be able to tune in into a designated channel and you’ll be able to see various parks. This will help with the surveillance. Someone will see if there is illegal dumping or vandalism occurring. They can call DPR,” Quinata said.

Meanwhile, park officials also reported on the status of the islandwide restroom renovation project, which is part of Phase I. So far, all 16 park restrooms funded by DOI have been renovated and refurbished. Nine have passed inspection while the rest are still awaiting inspection.

The park restrooms are still closed because of the current lockdown restrictions.