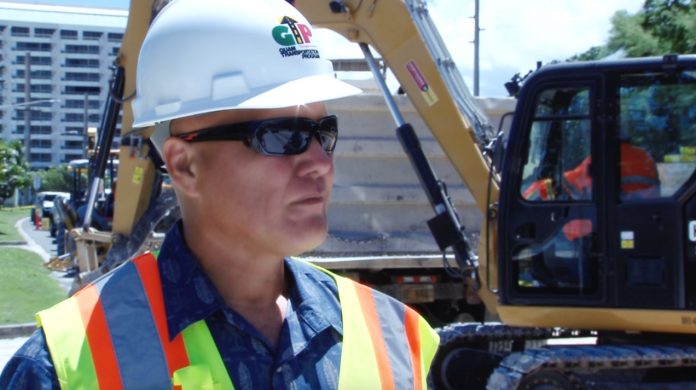 Guam residents will be happy to hear that the work on a collapsed pavement on a section of Marine Corps drive is expected to be done as early as tomorrow, this according to DPW director Glenn Leon Guerrero.

The damaged pavement on Marine Corps. Dr., has slowed traffic on one of the islands busiest roads. The road collapsed last week Monday and Department of Public Works has been working every day to restore the road back to normal.

So far, Leon Guerrero says DPW has completed repairing two lanes nearest to the hillside and is working on finishing up the three lanes closest to the coast. He says DPW is installing a secondary pipe beneath the sewer line and after that, they will begin patching up the road. Leon Guerrero gave PNC an update at the construction site earlier today.

“Well we finished the two lanes, the lanes that are closest to the hillside. We’ve got these last three lanes to finish, were sending the secondary pipe down underneath this current sewer line, once we finish that we’ll wrap things up and we’ll close up,” said Leon Guerrero

As of earlier this afternoon, two lanes remain open for both north and southbound traffic at East Agana.