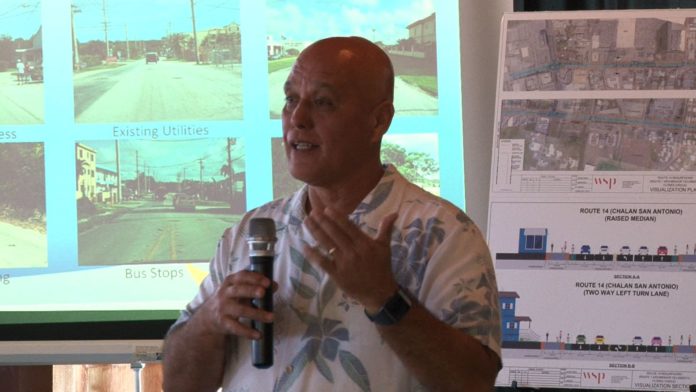 While the presentation sought to highlight projects on Ypao and San Antonio roads, discussion shifted to a topic of concern for island residents: Speeding.

Of most pressing matters, Route 10 in Mangilao has been a site for one too many traffic fatalities. The department is investing $3 million dollars into a Safety Project which will introduce medians and an intersection, all in an attempt to curb the prevalence of speeding that poses a threat to the community.

Traffic lanes are typically 11-12 feet wide however, the lanes along Route 10 are wider, thus allowing motorists the ability to drive at an accelerated rate.

Speaking further on traffic accidents, Leon Guerrero talked about the department’s Guardrail Program. The program works in collaboration with the Attorney General’s office to hold those responsible, accountable for damage to our islands infrastructure.

“So, if we know of an accident, the problem is that we are so short manpower, I would go and I would tell the person, they can go pull down the accident report, and in the accident report it not only tells you who is at fault but who their insurance company is, and so our agreement is that we go and figure that out, and we have the insurance company…  because we don’t want DPW to fix it, we don’t want DPW to procure it. We just say, okay insurance company, go fix it, we’ll tell you if it’s good and then you can go make the claim. So, that’s what we’re doing”, said Leon Guerrero.

The department anticipates completion of the Route 10 Safety Project by the year 2020.