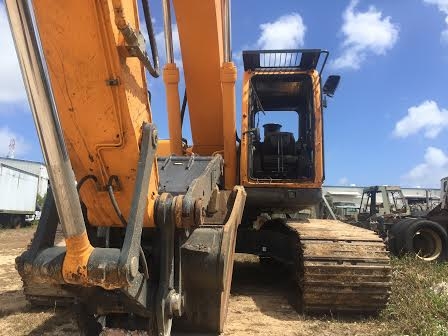 The excavator was pulled from the swamp and the DPW director believes it is salvageable.

Guam – The Department of Public Works sunk an excavator in the Agana swamp a few weeks ago.

DPW Director Glenn Leon Guerrero says they were able to pull the excavator out of the swamp. He says they were assisting the Guam Power Authority who needed help accessing some high voltage lines that run through the swamp. Leon Guerrero says that when they were helping to make an access road the excavator slipped into the mud. Leon Guerrero is conducting a full fledged investigation into the cause of the accident. “Some sources are telling us they believe that the thing could be damaged beyond repair,” said PNC. “No. That’s not true. I’ve actually seen the excavator I’ve actually climbed up on top of the excavator I’ve actually seen it. The whole engine is pristine hasn’t been touched everything’s nice the cab is the one that got wet got mud and so that needs to be serviced. I’m hearing that we need to probably change some of the switches because it was electrical. I think the battery was changed the starter was changed. I’m fully confident that the excavator we’ll get it back to running order.” He said the initial estimate is a few thousand dollars to replace some electrical components.