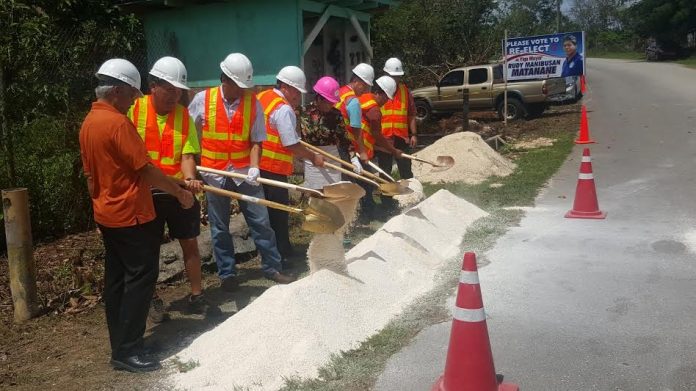 About 19 bus shelters around the island are already constructed.

Guam – A ground breaking ceremony was held for a bus stop in Yigo this morning and…according to officials…this is just one of many more to come.

According to Department of Public Works Deputy Director Felix Benavente, the bus stop in Chalan Ramirez in Yigo is just one of the many bus shelters that will be renovated before the start of the school year. Benavente explains that this project started last year as part of First Lady Christine Calvo’s “The Bus Stops Here” program. He says the department’s goal is to get a total of 45 bus shelters ready in 60 days. Yigo Mayor Rudy Matanane says he’s very thankful because this particular bus stop is utilized by many residents in his village.

Benavante states, “At this time, we have about 19 bus shelters already up. We have about 12 to 14 left. This is Phase I. In Phase II, we anticipate getting another seven or eight. So overall, we have about 40 to 45 school bus shelters but we still have the wooden ones. In some locations, we have some wooden bus shelters still in good shape so we take them back, fix them up and repaint them.”
The Bus Stops Here project is funded by over $600,000 worth of Department of the Interior federal grants. The contractors are Asia Pacific and Pro Pacific.