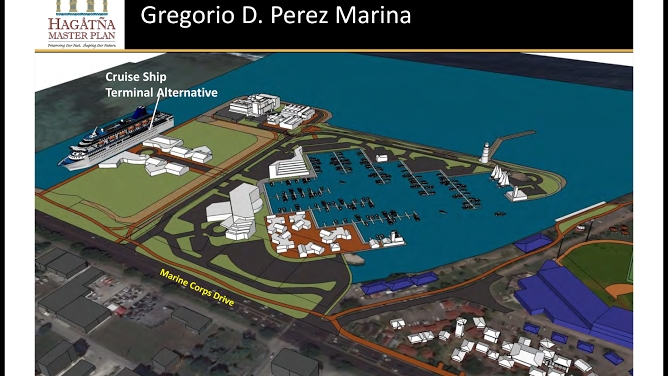 Guam – Imagine things like a hotel where the Hagatna sewage treatment plant currently sits, a cruise ship terminal in the Hagatna marina, a Governor’s Palacio, governor’s offices, and legislative offices all surrounding the Plaza De Espana. These are just some of the proposals in the draft of the master plan for Hagatna which was completed based on input that was received at an open house and online survey.

The draft master plan for Hagatna includes a lot of interesting proposals. For example plans for a civic center plaza which would involve the reconstruction of the Governor’s Palacio. This would occur in the Plaza de Espana area near where the old DOA building or Governor Manuel F.L. Guerrero Administration building was torn down. The plans actually call for the reconstruction of this building along with offices for the administration legislative offices and even another building to serve as the governor’s office behind the Governor’s Palacio.

Then there are the plans for the Paseo area. This calls for the expansion of the Chamorro village area which is already beginning with the cement latte stone huts or kiosks that are currently under construction for FESTPAC. Shots of Latte huts for FESTPAC. There is the fishing platform which is currently under construction as well as plans for some sort of Guma Ulitao or traditional Chamorro bachelors hut. There are plans to expand of the fisherman’s co-op, build a parking garage a multi-purpose stadium and even the reconstruction of the old Spanish Fort San Rafael.

Another very interesting feature is the proposal for a pedestrian bridge at the Chamorro village to span Marine Corps Drive. Then there is the Gregorio D. Perez Marina or the Hagatna Marina. The draft plan has narrowed these plans down to four alternatives all of them calling for land reclamation and major expansions of the marina.

The master plan also calls for the use of various latte stone shaped signs to be used throughout Hagatna.

This is just some of what is in the draft of the proposed master plan for Hagatna. The information is based on a power point presentation made by the Matrix design group to the Hagatna Redevelopment Authority showing what they have narrowed down as the preferred alternatives for the redevelopment of Hagatna. The draft plan was made after collecting input from an open house and online survey. 30 people voted in the online survey.