Guam – Four people have now been charged in connection with a Friday morning raid on a home in Tamuning from which 2 of the suspects admit they sold “ice.”

The four charged in Superior Court Saturday are 46 year old Brian Anthony Perez; 45 year old Patrick Paul Perez [aka Patrick Peckich];  43 year old Elizabeth Ann Borja and Joe Agulto, who was not yet in custody as of  Saturday afternoon.

According to the Magistrate report, both Brian and Patrick Perez admitted to police that they sold “ice” from the residence which is located within a designated drug-free school zone, just 250 feet from a school bus stop.

The 4 were charged with:

The Friday raid was conducted by officers with GPD’s Special Investigations Section, a Guam Customs drug sniffing K-9 unit, and agents with the federal Bureau of Alcohol, Tobacco and Firearms [BATF]. They executed a warrant, just after daybreak, at the home on Espiritu Street in Tamuning.

At least 2 controlled buys were conducted at the residence.

One buy occurred on November 28th of last year when, according to the Magistrate Report, a Guam Police Informant [GPI]  “arranged to buy $200 worth of  ‘Ice’ from Patrick Perez aka Patrick Peckish. The GPI arrived at the Perez residence and consummated the drug deal through an associate of Patrick Perez identified as Joe Agulto. An ATF Officer seized the plastic baggie which contained the suspected ‘Ice”. A field test was conducted, which returned positive for the presence of Methamphetamine.”

The other buy described in the Magistrate report occurred last Monday, March 22.

“An SOI [Source Of Information – informant] made a phone call to Elizabeth Ann Borja requesting to purchase $100 of ‘Ice.’ The SOI met Borja at the residence of Brian Perez and Patrick Perez aka Patrick Peckich. At approximately 10:45am the SOI proceeded to the ‘Perez Residence’ to meet with Borja. Borja met the SOI and handed the SOI the drugs. The SOI returned to Bureau of Alcohol Tobacco and Firearms and Explosives (BATFE) where he/she was debriefed and the evidence was seized by a TFO Officer. The SOI purchased one small clear plastic bag containing a white crystalline substance, suspected to be ‘Ice’. A field test was conducted, which returned positive for the presence of Methamphetamine.”

On Friday, Guam Police spokesman Officer A.J. Balajadia told PNC News that “an undetermined amount of chemicals were seized,” along with “other paraphernalia.”

When asked whether this was a meth lab, where the drug known as “ice” was being manufactured, Officer Balajadia said: “It was not an actual meth lab, but the chemicals indicate they may have been attempting to set one up.” 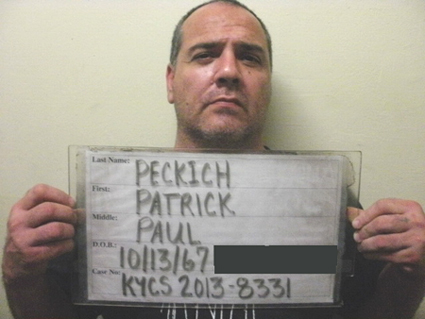 Officer Balajadia also advised that we can expect to see more warrants of this type to be executed in the near future and he called on the public to to contact Guam Police, or call Guam Crime Stoppers at 477-HELP if you have any knowledge of drug houses on island.

READ the release from GPD Spokesman A.J. Balajadia below:

TAMUNING, Officers from Special Investigations Section, Special Operations Division and the Customs and Quarantine K9 Unit executed a Search Warrant on a
residence on Espiritu Street in Tamuning on Friday, March 22, 2013 at around 6:00am.

Two individuals were taken into custody;

Chemicals, and Drug Paraphernalia were confiscated by agents with SIS.